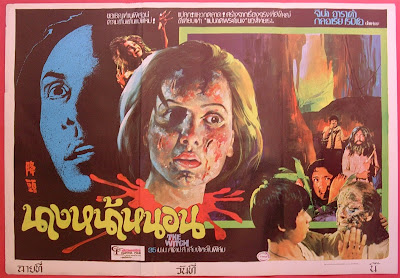 Check out this awesome film poster I bought from an eBay seller in Thailand a little while ago. I received it a couple of days ago and it's even more awesome when you see it for real!

It's from a Filipino horror movie called THE WITCH from 1975. I have never seen the film and it seems it may very well be a lost film (or at least unreleased in any home cinema format!). Andrew Leavold wrote the following info on his blog:

Here’s an interesting pan-Asian project: a horror film co-financed by Hong Kong and the Philippines and released in a Tagalog version in 1975. Despite all efforts trawling the net and cross-referencing the Chinese names on the Hong Kong Movie Database (www.hkmdb.com), I can’t find any trace of a Hong Kong release under “The Witch” or any other title.

Can anybody please help with evidence of a release outside of the Philippines, other than these Thai posters?

The seller had two alternative posters for THE WITCH, this version underneath is the one Andrew bought: 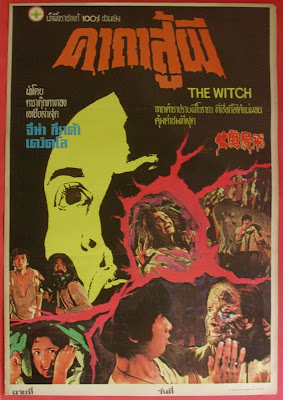 [click scans twice to watch them in proper size]
Posted by Jack J at 10:14 am

Email ThisBlogThis!Share to TwitterShare to FacebookShare to Pinterest
Labels: Philippines, Witch; the