aka BLACK MAGIC WITH BUTCHERY
directed by Lo Lieh 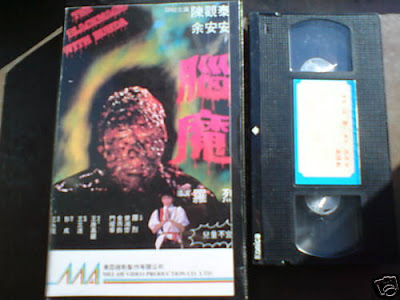 Two adventurers find a mummy in a grave in Thailand. They open the mummy's head and take out the brain. One of them, Ben, brings it with him back to Hong Kong in a little wooden box. Once back home in HK Ben wants to use the brain to gain wealth. The brain has some kinda power and by using black magic Ben can get it to help him reach his goal. But as in so many other 'black magic' films from HK the main character is truly a bad egg, and Westerners often find it hard to deal with a film that doesn't have a good looking hero who at the end would score some equally good looking chick!

Well, as I said Ben uses the brain to become rich but as so often when you sell your soul to evil forces there is a price to pay: When Ben has got his wealth he must return the brain to where he took it. And as it is also often the case, our 'hero' doesn't wanna fulfil his part of the deal. And so heaps of weirdo stuff take place due to the brain being pissed off with Ben: Ben's family find dead dogs and monkeys 'round the house. While Ben is driving his car blood suddenly gushes down the front window. The evil brain changes to a bigger size and hides in the fridge!

There is also some amazing wild and gory scenes containing quite a bit of the old gooey red stuff: Ben chucks up pieces of brain, the pieces collect themselves into a full brain and then tries to escape a good magician who tries to zap the brain with, like, a zapping spell! Ben is also attacked by the brain that then opens his head so that his own brain is spurting out everywhere and down his face like gooey porridge! And heaps of other wild stuff happen! 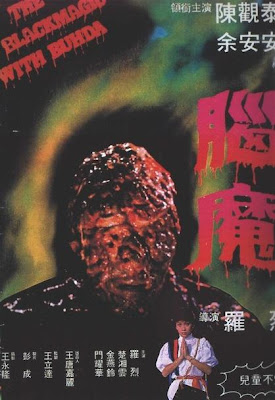 The flick is directed by Lo Lieh, who also acted in the BLACK MAGIC films, and also in HUMAN SKIN LANTERNS. The style of BLACK MAGIC WITH BUDDHA is smiilar to that of BLACK MAGIC 2 (and probably also BM 1 and HUMAM... but I haven't watched those, unfortunately!) and THE RAPE AFTER.

These are movies with black magic and gross-out stuff that you don't find in any Western films; there is an almost nasty feeling that follows you thru the whole movie! All these films are highly recommendable! They also steer away from the hopping vampire/ghost movies in that they are played straight. There is none of the otherwise well-known HK slapstick humour. The only funny scene in BMWH is entirely due to the version I watched wasn't shown in its letterboxed original format but had been changed to the tv format, which meant that in one scene you see a knee sitting at a table talking to a hand on the other side!

The subtitles were, well, lets just say they were a bit hard to read, with words missing at the beginning and at the end of lines, odd grammar and ehh unusual spelling. But on the other hand, this here is a Danish fanzine and who be am I to slag other pepples off for doingg inkorrect inglish! But anyway, when a film is as good as this who gives a fuck!

Brian at Cool Ass Cinema blog also just reviewed the film and the poster scan in this post is borrowed from his review (and he got it from Hong Kong Movie Data Base, LOL). The VHS cover scan is from Lars Jacobsson.
Posted by Jack J at 9:11 pm