Unfortunately, less than a day after I won the SNAKE QUEEN vhs, I learn that Suzzanna, the queen of Indonesian horror movies, has died. :( 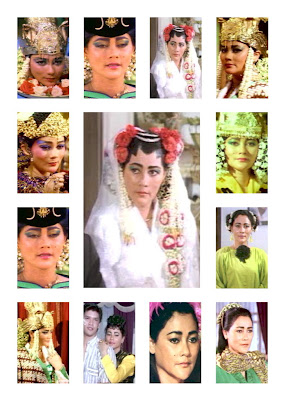 Legendary actress Suzanna, famous for her roles in horror and mystery films, died of complications from diabetes in a hospital in Magelang, Central Java, on Wednesday. She was 66.

The actress, best known for her role as the Queen of the South Sea, had been receiving treatment at the Harapan Hospital for five days. She died two days after her birthday on Oct. 14.

She is to be buried at Girimulyo Cemetary in Magelang.

Suzanna, whose real name was Suzanna Martha Frederika van Osch, became a household name thanks to her roles in 1970s and 1980s supernatural movies such as Beranak Dalam Kubur (Giving Birth in the Grave) in 1971, Pulau Cinta (Love Island) in 1978 and Ratu Ilmu Hitam (Queen of Black Magic) in 1981.

Her characters Nyi Blorong and Nyi Roro Kidul, both strong women with supernatural superpowers, led her to be known as the era's queen of the horror film. All the films in which she starred as such women were box-office hits. (dre)

Horror actress Suzana, who was crowned the Queen of Indonesian Horror, passed away at her home in Magelang, Central Java, on Wednesday. She was 66.

Suzana had suffered from diabetes over the last five years and was being treated at Harapan Hospital. She was buried on Thursday at Giriloyo cemetery.

"According to her will, she did not want a big funeral in which many people could watch," her lawyer, Bambang Tjatur Iswanto, was quoted as saying by Antara.

Born Suzanna Martha Frederika van Osch in Bogor, West Java, on Oct. 14, 1942, Suzana began her career in acting when she was a teenager in the film Asmara Dara (1958). She won the Best Child Actress award at the 1960 Asian Film Festival for her performance.

She enjoyed a stellar career in the 1970s and 80s through her roles in horror films, most of which are now considered classics, including Bernapas dalam Lumpur (Breathing in the Mud), Beranak dalam Kubur (Delivering a Baby in Grave) and Sundel Bolong.

At the 1972 Asia-Pacific Film Festival in Seoul, South Korea, she was crowned Asia's Most Popular Actress.

After a long hiatus from 1991, she returned to the acting world when she starred in a sinetron (TV soap) called Selma and Ular Siluman (Selma and the Snake Ghost) in 2003.