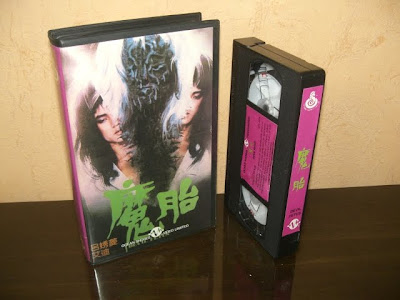 by GÜNTER MÜLLER
If I’m informed correctly DEVIL FETUS should be easily available on VCD, in wonderful widescreen, both in subtitled and unsubtitled versions! I also own a DEVIL FETUS tape, that has English subtitles, but sadly is a horrible full screen version. It should go without saying that the subtitled widescreen disc is the way to go. [Note: Devil Fetus is now available on a fully uncut, letterboxed DVD in Hong Kong/Jack] All those versions seem to be fully uncut too, by the way. DEVIL FETUS is rated Category III, and to be honest, I can’t explain why. Sure, it’s gory and bizarre, but I think it won’t get a CAT III rating if released today. And if you’re expecting gratuitous sex and/or explicit sexual violence because of the rating - you definitely are wrong! There are a few spoilers ahead so read at your own risk!

The film opens with a girl who buys a statue in an auction, from where at night a monster gets out of, and it does exactly what monsters out of statues usually do: it rapes the girl (parallel’s to the excellent THE RAPE AFTER (1983) are obvious; accidentally, both movies were made in 1983!). At this time you think that the girl will produce an offspring that jumps out of her womb and kills various people in many gory ways, right? Wrong! The confusing story deals with possessed people, dogs and furniture, who attack various characters and try to finish them off. They don’t succeed most of the time. Then why is this one called DEVIL FETUS, you wanna know? Don’t ask me, I have not the slightest idea. But who needs a fetus when the movie is as entertaining as this one, with a few outstanding set-pieces and gory highlights? 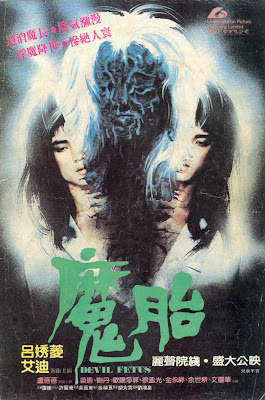 Such as a man who rips the decayed flesh on his face away and reveals crawling and writhing worms underneath. A girl who vomits live worms (also seen in CENTIPEDE HORROR (1982) and SEEDING OF A GHOST (1983), yuck!). A nice dog who is possessed and attacks a man, and in the fierce struggle gets killed with a sword (I do hope not for real!) Later, it (the dog) is eviscerated and another possessed guy munches on his guts in best Italian cannibal movie fashion (I again hope not for real!). A big bird (an eagly maybe) is killed by cutting its throat (this sadly IS for real). The absolute highlight: a man is trapped in a small room, when suddenly the walls are closing in on him. It’s nice that one side has a glass window, so we are able to witness the slow crushing of his head in wonderfully gory fashion! Yeah! This scene is incredible! One of my favourite head-crushings of all time, even better then the classic sequence in the unrated THE TOXIC AVENGER (1985). And then there is the showdown where the monster appears out of a possessed man (it rips his skin away), gets decapitated, but a few heads grow instead of the old one, and all of ‘em are decapitated too. The last shot is one of the most wonderful in Hong Kong horror cinema history, with a severed head - after attacking a woman - being killed with a sword and then the head starts to decay before our very eyes via stop-motion! This effect looks a bit cheap and phony, but it is very inventive and incredibly charming (think of the stop motion scenes in THE EVIL DEAD (1982) and BASKET CASE (1982), and you get the idea). Well done, folks! Give me more of this! With scenes like that, who cares if the movie makes any sense (which it doesn’t)? Certainly not me!

DEVIL FETUS is maybe one of the weirdest movies I ever had the pleasure of watching. There’s so much going on, and little of it makes any sense, so you sit there, shaking the head, and wondering what the hell is going on. A very entertaining, bizarre and gory horror movie from the wonderful 1980s, not to be missed! I think I will never forget the excellent head-crushing and the last image (of the severed decayed head ‘rolling’ towards the camera and grinning into it) when the credits start to roll...

DEVIL FETUS was Lau Hung Chuen’s debut movie as director. He followed it with THE GHOST INFORMER (1984), A CHINESE LEGEND (1991) and THOSE WERE THE DAYS (1996) among others. Beside being a director, he made himself a name as a very competent cinematographer. His credits include UNDECLARED WAR (1990), QUEEN’S HIGH (1991), THE SWORD STAINED WITH ROYAL BLOOD (1993) and THUNDERBOLT (1995). The producer of DEVIL FETUS is a certain Lo Wei, well-known as the director of the Bruce Lee starring THE BIG BOSS (1971) and FIST OF FURY (1972).
The review is based on the unsubtitled VCD. I didn’t bother to watch the subtitled full screen tape again, sorry. There’s too little time anyway.