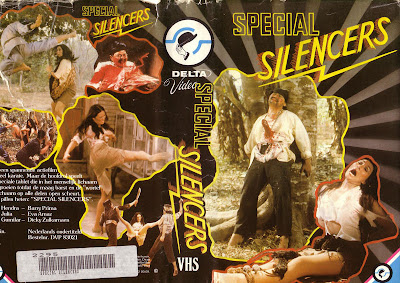 I was gonna review this film first but incidentally Todd over at the excellent "Die, Danger, Die, Die, Kill" blog just reviewed it so I might pull that review back a while. For his review go here.

What's it all about?

Why "Backyard" Asia?
Because everybody else writes about kung fu films, J-horror, new Korean cinema, and not to mention Japanese monster movies.

When you read about Asian films on other online sites you kind of get the impression that there's nothing new to discover. A lot of these sites and blogs seem happy to only write more about the same old stuff and/or the new popular stuff. What's the point?

I've been watching weird, cool, and awesome (and sometimes very violent) Asian movies since 1990 and when I decided to start this blog I had no desire to merely confirm how awesome GODZILLA is and that it's really, really cool that we don't need to settle for the "King of the Monsters" edit anymore.

I love the same popular Asian cinema that everyone else and his ugly cousin loves but is it really necessary to write blog post number three billion about it? Where's the fun in that!? I'd rather write about some obscure/forgotten/never discovered/lost/maybe awful/maybe wonderful weird movies from the outskirts of Asia. Now, that's where the fun is at! Now, there is a purpose for a blog! Now, that is needed! Why? Because nobody else* does it!


*I'm slightly exaggerating there, of course. Fortunately, I'm not entirely alone, although we sure are few and far between, there is a handful of like-minded fans into Asian worldweird cinema - check out my blog roll on this page.

PS: Please notice - I often get emails from people asking where they can download the films that I write about. Sorry, but I can't help you as I don't download from torrent sites or anywhere else. I might find the odd rare film on YouTube but that's about it. I have absolutely no idea of how and where you can download from (other than YouTube). And I do not have an interest in uploading my films to anywhere in Cyberspace – so save your time asking! I collect original video tapes, dvd's, video-cd's, laserdiscs, and I even still tape stuff off telly. Yeah, I'm old-skool. ^_^


PS.PS: to learn more about the author of this blog here's an interview that the spiffy Kwaidan Klub did with yours truly.
Posted by Jack J at 4:01 pm 14 comments

Email ThisBlogThis!Share to TwitterShare to FacebookShare to Pinterest
Labels: Editorial ramblings, Who's behind this and why
Newer Posts Home
Subscribe to: Posts (Atom)