– Obviously, someone couldn't tell the difference between Thomas Weisser's bootleg-dvd and the official Japanese dvd!!!
In fact IMDb lists TWO English titles for the Japanese dvd – needless to say the same dvd doesn't have two different English language titles. Doesn't anybody check their info at the IMDb!?!?!?)

In 2004 Bruno Mattei remade Ruggero Deodato's CANNIBAL HOLOCAUST from 1980 and called it MONDO CANNIBALE. He shot the film back to back with NELLA TERRA DEI CANNIBALI (aka Land of Death/In the Land of the Cannibals) in the Philippines with an internationally unknown cast (I haven't been able to find ANY info about the actors apart from the two American expats). The two American expat Filipino actors are Mike Monty and Jim Moss. For some reason they´re both uncredited. Both passed away a couple of years later. Andrew Leavold quoted Nick Nicholson's comments about Jim Moss' passing here.

The American DVD from Intervision is retitled Mondo Cannibal but I'll refer to the film under the film company's international title, CANNIBAL WORLD (why do American labels always have to retitle films to make everything more confusing???)


As I said, CANNIBAL WORLD is a remake of CANNIBAL HOLOCAUST. I should point out this isn't just me going, "Hmm, I think that scenes resembles this other scene a bit". No, we're talking frame by frame remake here. Done exactly the same way. Just, uh, worse (haha). A film crew goes into the jungle to find natives to do a documentary film about them – exploitation style. After a while the crew goes into taking extreme measures to exploit the locals. If you've seen CH you know what I'm talking about; set village on fire, cut head off young man, rape his girlfriend, stage various scenes, etc.

If you didn't like the original film because there's a turtle being killed I would advise you to stay clear of this as well; there's no turtle killings but a big lizard is being gutted alive.

Mattei also finds time to, once again, reuse cannibal footage from Akira Ide's NUOVA GUINEA: L'ISOLA DEI CANNIBALI (1974). He also did this in his HELL OF THE LIVING DEAD in 1980.

CANNIBAL WORLD is on a completely different level than CANNIBAL HOLOCAUST. While CH is a masterpiece CW is a SOV crap-piece with "actors" who overact like 12 year old kids from theatre class. There are a couple of scenes of women being infuriated and I was cracking up laughing. One of them slapped a curtain out of anger. A curtain!


Now, if you're thinking this is probably a crappy film I fully understand where you're coming from. But you'd be wrong. CANNIBAL WORLD is highly entertaining! No, it's not a "good" movie in the classical sense of the word, but to me a good movie is one that entertains me. A crappy movie is a movie that bores me. One that leaves me feeling I've wasted my time. I was fully entertained by CANNIBAL WORLD and I want to watch it again. Overacting, gore, nudity, Filipino cannibals, what more do you want! – that's a rhetorical question, you don't have to answer it (your answer would most likely be "a better movie").

Finally, a comment about the Intervision NTSC DVD that I've just bought; The picture quality is really good for a DVD (there are no blu-ray releases). However, the label decided to present the film open matte! The Japanese DVD is 16:9 widescreen and by (a quick) comparison I must admit the widescreen framing looks better. But it's a minor gripe and I'm just happy this film (and its companion, Land of Death) is available on DVD. The Intervision release has a trailer for the film in the extras – and that's it!


Japanese trailer (in the wrong format but still) 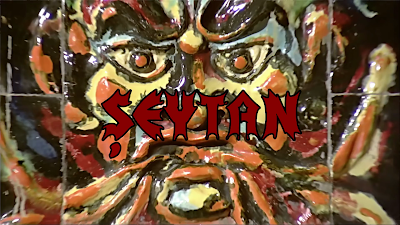 Now, THIS is something!!! A restored 1080p upload of the Turkish remake of THE EXORCIST!!! And it's for free!

The film is called SEYTAN (aka "Turkish Exorcist" among fans) and it was directed by Metin Erksan in 1974 - the year after the original film came out.

SEYTAN is an almost frame-by-frame remake of THE EXORCIST. However, one difference is that the priests are not Christian but Muslim. And, well, the Turkish film may not be quite as well made and scary as William Friedkin's original film. It's a lowbudget film (all genre films were lowbudget in Turkey in the 70s). But SEYTAN is both a fun flick to watch and it's an interesting watch not least because it's set in a different culture to the film it remakes.

The original version of THE EXORCIST hadn't even played in Turkish cinemas in 1974 so people didn't know what to expect.

No, there's no subs on this upload but as I said it is basically a frame-by-frame remake so you don't need them. I take it you've all seen the original film.

I should point out this is NOT an illegal upload! The film has been uploaded by the copyright holders. I'm told that home cinema formats are a thing of the past in Turkey now. Everything is streaming and download. The film company which owns the film has uploaded a ton of their films to YouTube - for free and all beautifully restored and in 1080p quality. I have no idea how they make money!

PS: forget the haters. This is a multo fun film!

EDIT: Someone is already working of a subtitle file!!!


AT BACKYARD ASIA WE STAND WITH HONG KONG

Is a little film blog about weird Asian films supposed to be political? Usually, I don't go down that route but this is important. I hate censorship - or censorshit as we call it here. Usually, I deal with censorship in films but this is so much more; Censorship as a way to keep people down. To shut them up. No, just no! Apparently, some companies in the West cater to the Chinese government and their censorshit - but I don't. This blog doesn't. So here's the full episode of South Park that they didn't want.

Margaret Thatcher should never have given Hong Kong back to the Chinese but the cunt just wanted to get better trade deals with China. In 1996 I didn't for one minute believe the mainland would leave the old crown colony alone and, unfortunately, now we see they didn't intend to.


EDIT (10/10/2019): For some reason the original YouTube uploader *decided* to remove SP S23E02. I've now embedded another upload, this one has even optional subtitles in Chinese.

EDIT (11/10/2019: YOuTube deleted the second upload of the episode as well. Has YouTube been bought by the Chinese? Anyhoo, I'm uploading it myself via Blogger now. Let's see how long it gets to stay here. Blogger and YouTube are owned by the same people as far as I know (i.e. Google).
Posted by Jack J at 8:50 pm 0 comments