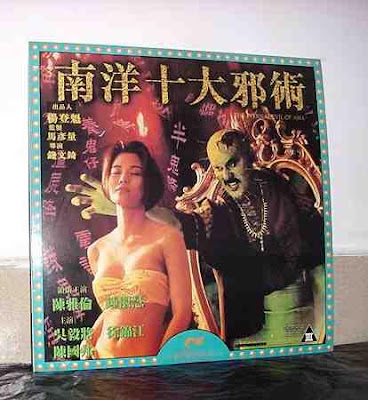 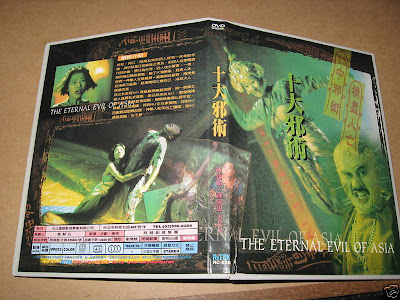 A few days ago I posted about what I called a new official DVD release of BIONIC BOY & DYNAMITE JOHNSON from Germany. Unfortunately I've just been informed by the son of Bobby A. Suarez, Roberto S. Suarez II, that the DVD is a bootleg!

Thank you for your continued interest on my late father's movies. I have read in some thread about your fascination for his films. However, I believe that the DVD release of the two Bionic Boy movie is coming from an illegal source. Sad to say but as far as we are concerned the only territory that there is a legal right to sell Dynamite Johnson is MPI/Dark Sky Films who currently owns the North American territory for the said movie. Bionic Boy part 1 is owned by Intercontinental films.

That's too bad. Fred Anderson of Ninja Dixon blog has bought the DVD and he tells me the films look like they've come from a Beta-master and are presented in non anamorphic widescreen.

Too bad the company were too greedy to pay the copyright fee (probably not very much) to issue a legit release.

Thanks to Roberto for the info. 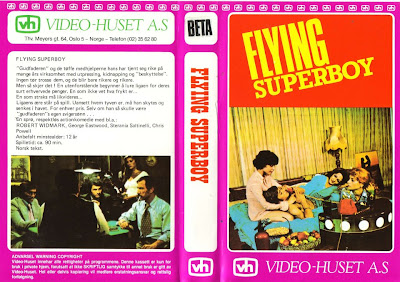 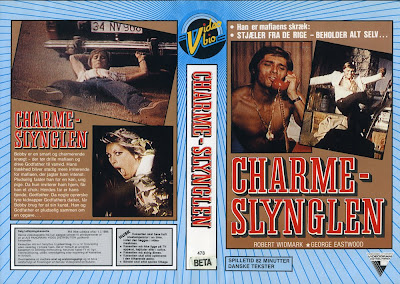 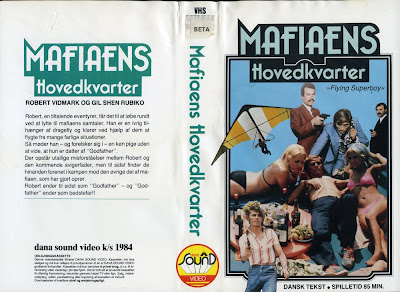 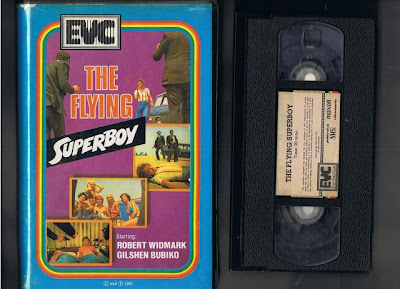 Thanks to Diabolik & Dag-Johnny for the Scandinavian scans.

EDIT: It seems Ninja Dixon deleted his upload so I reuploaded the trailer just for your pleasure! xD 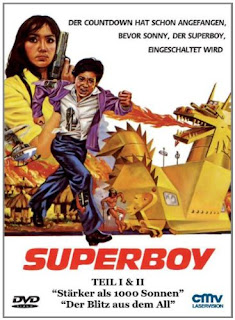 Well, I ought to say they are finally on DVD again as they are already on DVD in South Africa but those two DVDs are long out of print and are very hard to get by now.

However, I've just been informed that the Bobby A. Suaerz produced BIONIC BOY and DYNAMITE JOHNSON (aka Bionic Boy 2) have been released on a single DVD in Germany (under the title Superboy 1 & 2) and (according to Amazon.de) luckily both films carry the English dub! And they are letterboxed!

I have no info on picture quality but seeing as the South African DVDs were pretty rough looking (direct off film prints and no care taken in regards to make the transfers look their best) chances are this DVD is gonna make the films look better than what they have before on home cinema format. If and when I get more info on the quality I'll be sure to post it here.

THEY CALL HIM CHOP SUEY - trailer

Email ThisBlogThis!Share to TwitterShare to FacebookShare to Pinterest
Labels: They Call Him Chop Suey - trailer

Rare alternative trailer made for the Danish market (HITMAN was a co-production with a film company in Denmark):

Thanks go out to Diabolik (aka Hans-Jørn Reimer) who dug out the Danish trailer from an old Danish ex-rental VHS.

Trailer for Cirio H. Santiago's FLY ME is now on YouTube. Sure, it's a short one, but never the less a sweet one! xD

I can't believe this is finally being released! As I've mentioned before, I'm only aware of two video releases and they're more rare than getting laid at a dike slumber party!!! (to coin an old Damon Foster joke from Oriental Cinema). And on top of that Shout! had decided NOT to release the film cos their print was too worn for their liking but it was the only print they could get hold of and fans (me being one!) kept bugging them about it. I have no idea if fan barracking helped but it's coming out now anyway. Whoo-hoo!! I can certainly live with the film looking like it was shot on celluloid (not everything has to look like it was shot on video if ya catch my drift. LOL).

Email ThisBlogThis!Share to TwitterShare to FacebookShare to Pinterest
Labels: Fly Me - trailer

Spiralheadcase on ebay in Japan has the Japanese VHS of the rare HK horror comedy FIRST VAMPIRE IN CHINA up for auction! For the HKMDB go here. The tape is in Cantonese with Japanese subs. There's no DVD release of this film. There's an English subbed laserdisc from Hong Kong but it's very rare. The auction runs another day. Go here.

Edit: the final bidder won the tape at 31 dollars. 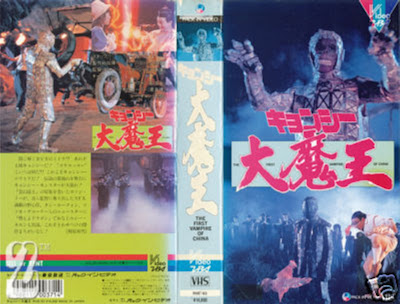 PS: this is a genuine tip for fans of these films, I'm not the seller nor am I affiliated with him.
Posted by Jack J at 4:37 pm 0 comments

While we're waiting for SHOUT! FACTORY's upcoming release of Lethal Ladies vol. 2 which contains the two RARE Cirio H. Santiago films FLY ME and COVER GIRL MODELS you might wanna check out Ian Jane's review (and scans) of the set over at his Rock! Shock! Pop! site (the lucky bastard got a review copy quite a while back!). 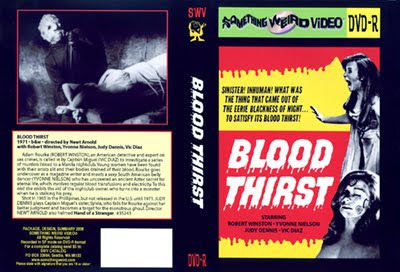 Here's the Filipino film BLOOD THIRST. It stars Vic Diaz and was originally made in 1966 but wasn't released until 1971. Something Weird Video have released it as both a 2-film DVD (the other film is the British horror movie BLOOD SUCKERS, starring Peter Cushing) and as a single film release. Do notice that the double film release is a real pressed DVD whereas the latter is a DVD-R.

Filipino women found with their blood drained bring American sex-crime expert Adam Rourke to Manila in search of the killer. Armed with a lisp and a mannequin named Harvey, Rourke soon becomes prey to a "Golden Goddess" possessed of eternal youth, and a creature whose face looks like melted flesh.

Haha, great plot description there! I'm also posting the cover for the single film release which I actually prefer (the cover that is) but like I said it's a DVD-R. 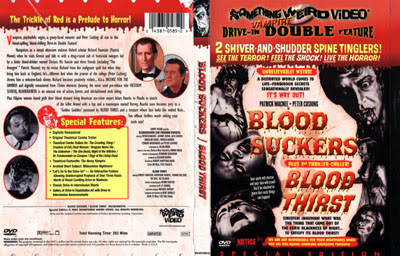 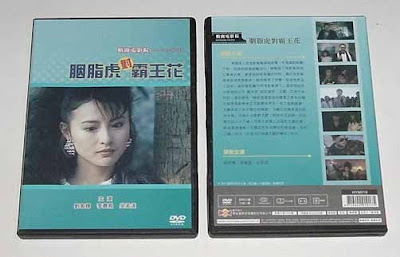 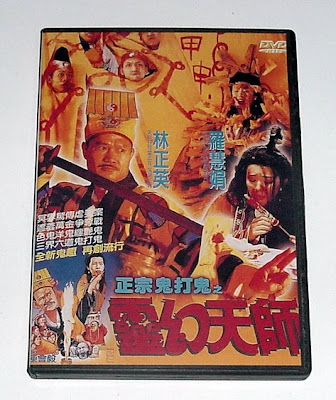 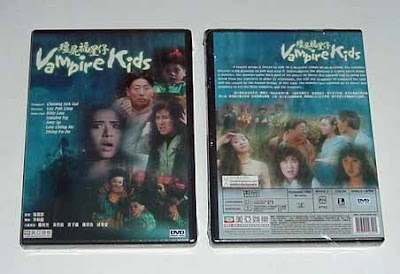 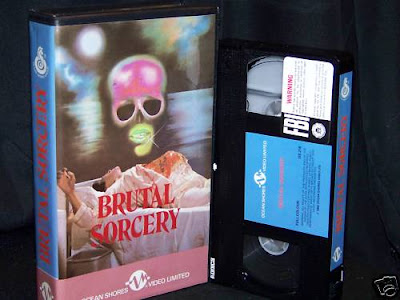 I have lost count of how many times I've lost the Ocean Shores VHS release of BRUTAL SORCERY. But now... NOW... I've finally won it on eBay. Surprisingly enough I was actually the only bidder. Someone suggested it's because everyone else who wants it has already got a copy now. Haha. I'm no so sure about that, it's still a quite rare tape. Maybe it was partly because the tape was listed on eBay UK. Anyway, I'm certainly thrilled to have won it (the picture in this post is from my scan archive, it's not the actual copy that I won).
Posted by Jack J at 10:45 pm 0 comments

Alapaap over at Ninja Dixie

Just to let you know Fred Anderson reviewed the obscure and rare Filipino horror movie ALAPAAP (aka Counds) over at Ninja Dixon. Also check out his recent review of the old dark and nasty Taiwan favourite THE DEVIL. Go here.

But I'm not at all sure why he wouldn't have heard about ALAPAAP before (as he states) as I've had an entry for it on BACKYARD ASIA for many months. LOL.
Posted by Jack J at 10:52 am 0 comments