[This is the uncut trailer from a Danish ex-rental VHS, not the censored Australian trailer]

NAKED VENGEANCE (1985) - Now don't get me wrong here: I find most of director Cirio H. Santiago's films to be average at best, but he must have been taking hallucinogens here because he has turned out a perfectly crazy rip-off of I SPIT ON YOUR GRAVE (1978), maybe even outdoing it in sheer sleaze factor alone. Carla, a commercial actress (Deborah Tranelli of DALLAS fame), watches as her husband is gunned down by a creep he tried to stop from raping a girl.

She leaves New York City for her home town in the country and is savagely raped by five townies in her parents house. When her parents come home and see what is happening to their daughter, they are shotgunned by the gang and then kill the local retard, making it look like the retard did the killings. Thinking that Carla is dead, they leave the house and go to a bar and get drunk. Of course Carla is not dead, just in a catatonic state and she is brought to the hospital. 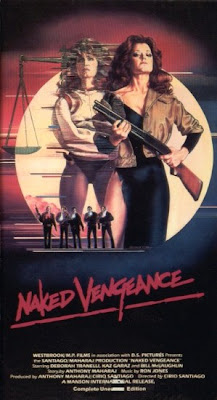 The local sheriff (Bill McLaughlin, who walks around with an expression on his face like he was sucking on a lemon all day), doesn't quite believe the story and wants to question Carla on what really happened. Her doctor refuses as Carla fakes amnesia while picking off her attackers one-by-one. She lops off the dick one one of them with a knife and, just to make sure he suffers more, attaches a grappling hook to his chest an has his boat drag him out to the middle of the lake to bleed to death.

Another one has a car dropped on his body as she steps on the gas and has the tire rim cut off his legs. The leader of the raping pack, Fletch (Kaz Garaz, who played a sheriff in the 1996 remake of HUMANOIDS FROM THE DEEP), who is the town's butcher, knows who is doing the killings and decides to form a posse (the whole town seems to be full of torch-weilding hicks) and trap Carla in a house and burns it down. Thinking Carla died in the fire (she didn't), Fletch goes about his business in his butcher shop only to be surprised by Carla, who cuts off his fingers with a meat slicer, plants a meat cleaver in his back and then blows his head off with a shotgun.

The sheriff declares that Carla is dead and the killings are over. The next time we see Carla is back in New York City, getting even with the punk who killed her husband. This is grand sleaze that never slacks off its premise, which is highly unusual for a Cirio H. Santiago film (FUTURE HUNTERS anyone?). The film moves at a brisk pace and is never boring. It was released in both R-rated and Unrated editions, the Unrated edition showing more of the gang rape and lingers more on the bloody violence. Guess which version you should track down?

Mr. Santiago has directed over 100 features (many for Roger Corman) and is highly-regarded in his homeland of the Philippines. I consider NAKED VENGEANCE to be his crowning achievement. A Lightning Video Release which has been long OOP. This is another film crying out for a DVD release. Also starring Ed Crick, Nick Nicholson, Terrence O'Hara and a cameo appearance by Carmen Argenziano (HELLRAISER:INFERNO - 2000 and STARGATE SG1). Also known as SATIN VENGEANCE, but I've never seen it released under this title. Unrated.

[Thanks to Fred for letting me post his reviews from his Critical Condition web-zine!] 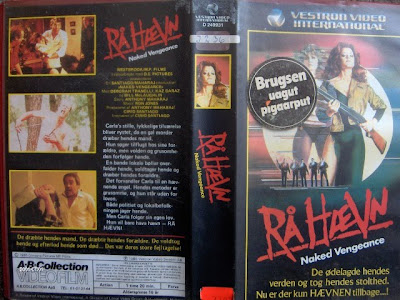 [This is an ex-rental tape from Greenland!!! Sadly it contains the R-rated print Fred mentions. Thanks once again to Diabolik of Cinehound for the VHS and for uploading the trailer for me. Cheers, mate!]
Posted by Jack J at 5:52 pm