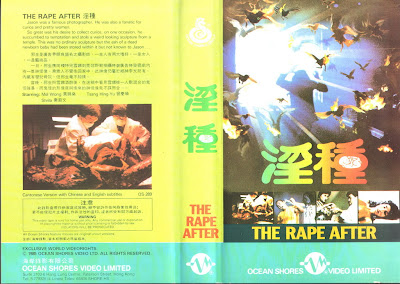 by GÜNTER MÜLLER
The story is a bit complicated, so I reduce it to the most important things. Shu Ya, a young model, gets involved with photographer Mo Hsieh Sheng , who stole a strange statue from a temple. He takes her home to take advantage of her, but both get very drunk and fall asleep. In the night, a demon (seems he emerged from the statue) appears and rapes the young woman in her sleep. The photographer falls in love with another woman (Li Ting Ting, who is the daughter of the master of the temple from where he has stolen the statue).

In the meantime, the model learns that she is pregnant. Mo takes her to a dubious doctor who performs abortions. But during the abortion, a storm with thunder and lightning turns up, and the abortion is seriously disturbed. Shu Ya decides to keep the baby, and Mo takes her to the hospital. On the ride there, the two begin a dispute about the future of the baby, and a fatal accident happens. Mo survives, but Shu Ya burns alive in the car wreck. She promises revenge. "You'll pay for what you've done!"

Later in the morgue, an autopsy is carried out on the horribly burnt corpse, when suddenly (after cutting open the womb) hands snatch at the doctor and pull his face into the guts. In the ensuing struggle his head comes off. A slimy baby is seen crawling away from the corpse, tearing out the umbilical cord. Later, very strange and terrible things happen around Mo, his girlfriend Li and the master. Mo, with the help of some priests, tries to find out the cause of the strange happenings and fights back. 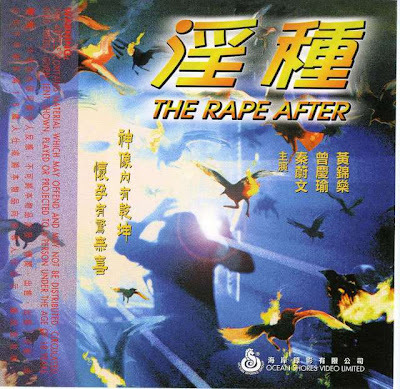 THE RAPE AFTER is an excellent but sadly almost unknown horror classic from Hong Kong. Made in 1983 by Tom Lau Moon-Tong (his only movie as director), THE RAPE AFTER mixes various influences to a highly effective brew.

The story seems to be straightforward, but you are wrong thinking that. There are a few subplots involving the mother and the retarded brother of Shu Ya, as well as the family of Li Ting Ting and her father, the master. Most of this stuff happens in the first half of the movie, making the structure of the plot a bit slow and complicated, but after the baby is "born", the action never eases up.

This movie is without a doubt one of the best and goriest horror movies made in Hong Kong in the 1980s. An undisputed classic of horror cinema if you ask me. There is absolutely no comedy in between the proceedings (which often is the case in Hong Kong movies), making this a very dark and disturbing film. I really go as far as to say that THE RAPE AFTER is equal to European horror classics from Fulci and Argento. Even zombies make a fine appearance in this excellent film. 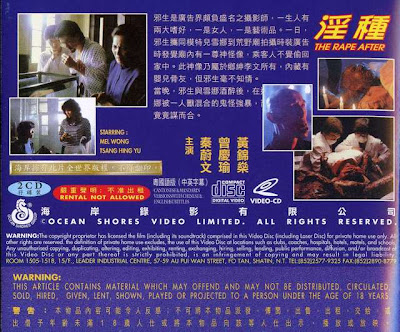 Right from the beginning, the film has a dark and threatening atmosphere. Until the rape by the demon (which has more the feeling of love-making; there is no struggle and the woman responds to the demon's touches) there are no supernatural elements, but in spite of this, the movie is dark and depressing. There are sad scenes with the deformed brother, or long shots of the stinking and rats-infested room where Shu Ya's mother lives.

The director takes his time to tell the story, showing many details in the depressing life of the model. After the rape, or more exactly, after the fatal accident, the film takes a completely different turn and becomes a revenge spectacle like you have never seen one before. Well maybe you've seen one: SEEDING OF A GHOST (1983) is even more bizarre and gory. What makes it even more shocking is the fact that the revenge is warrantable. The man (Ho) is not directly responsible for the happenings. Sure, he stole the statue and unknowingly frees the demon, but the impregnation and the accident are not directly his fault.

The second half of the movie is awesome. You can't deny a European feeling to the action. There are many wonderful setpieces, in which terrible things happen. Dario Argento's SUSPIRIA or Lucio Fulci's THE BEYOND come to mind when seeing the second half of THE RAPE AFTER. One of the best set-pieces I've ever seen involves a priest in a dark room, who is attacked by rats and birds. This is filmed very effectively from the opposite direction to the light, so an eerie look with creepy shadows is created. Then some birds fly through a torch, catch fire and attack the priest, turning him into a living human torch. This scene (and many others) has almost a surreal quality to it, is beautiful to look at and has a nightmarish feeling at the same time. But there are more setpieces like this.

There are some surprising twists and turns, as well as great shock scenes (for example the discovery of a corpse in a closet and a rat crawling out of its mouth). But in contrast with most of the new generation of horror movies (especially the teenie-slasher cycle), THE RAPE AFTER doesn't rely solely on "boo-scares" to shock and disquiet the viewer. It's the tone, the atmosphere and the story that counts! 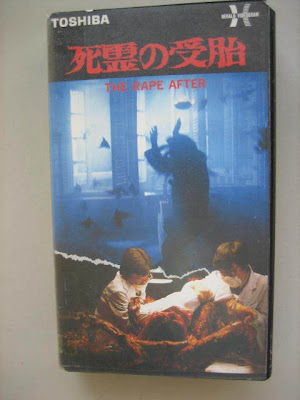 One scene in particular reminds me on another sci/fi-horror classic. The scene in question is the examination of the hideously burned corpse of the woman, which has many similarities to the burned remains found by scientists in John Carpenter's THE THING (1982). And it also is put to great effect in this film.

Director Tom Lau Moon-Tong does not cut away at the murder scenes (he also edited the movie, by the way) and shows a few brutal and shocking killing sequences that don't need to hide from European gore classics. An axe in the head or ears being torn off are made very competently. Apart from that the movie is very atmospheric and spooky. Most of the creepy scenes are filmed with a cold blue light that looks fantastic. The music is very eerie, unusual, and loud, creating strange noises that make your hairs stand up. And the cast is pretty good and believable too. So if you have the chance to get hold of this excellent film don't hesitate a second. You won't be disappointed!

Note: Altho the HK video-cd and VHS are both from Ocean Shores the VCD offers the fully uncut print whereas the VHS is cut! As far as I'm informed there is no laserdisc release.

- A fan has made a fan-edit that adds restored English subtitles to the Japanese VHS version with slightly bettered picture quality. This is a fan version and not for sale anywhere but it's downloadable from a certain torrent site.

Big thank you's fly out to Stephen Gladwin for providing me with the HK VCD scans. And equally big thanks goes to Peter from Cinehound for the Dutch scan and for uploading the trailer. Also many thanks to Günter Müller. Cheers mates!
Posted by Jack J at 6:56 pm

Email ThisBlogThis!Share to TwitterShare to FacebookShare to Pinterest
Labels: Hong Kong, Rape After; the, Reviews by Günter Müller (Weird Asia)