SEEDING OF A GHOST (Hong Kong)

Back in the early 90s I was a tape-trader and some of the films I had to get via tape trading were from that genre I like to call the "Dark and nasty horror movies from Hong Kong from the 1980s"! And one of the most legendary HK horror films among horror fans was... SEEDING OF A GHOST!!! 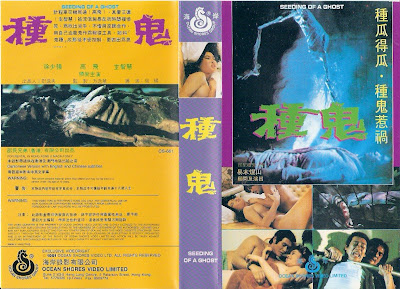 SEEDING OF A GHOST was never released on video neither in the UK nor the US, or anywhere else outside of Hong Kong (or Hongkong as they used to spell in back in the day in HK). Later it came out on HK VCD as well but it wasn't till quite recently that it was finally granted a DVD release. I'm not sure if there ever was a laserdisc release.

Anyway, the VHS soon disappeared and you had to resort to tape trading in order to get one. And getting a tape off an original tape was almost as difficult. Often you had to settle for foggy 3rd, 4th, or 5th generation dupes! Sometimes the colours kept disappearing. And you wonder why I spit in the face of fanboys who complain that perfect DVDs are "terrible" simply because they have something like one or two scratches to the print. :/ As far as I remember my VHS dupe of SEEDING was fairly alright, but when the DVD media became common and I got the chance of getting a DVD bootleg obviously I jumped at it right away headfirst. And now as I said there's a perfect DVD outta Hong Kong.

But enough of this baloney; The sole reason for this post is that after all this time I have finally got hold of the cover from that original legendary Ocean Shores VHS release!! No, I don't have the tape but my good mate Peter "Kothar" over at Cinehound has provided me with a scan. Thanks mate, I appreciate that!!!

SEEDING OF A GHOST was produced by Shaw Brothers and was originally meant to be the second sequel to BLACK MAGIC however SB decided otherwise. I believe it was due to the high level of gore and nudity in the film.
Posted by Jack J at 2:23 am

Email ThisBlogThis!Share to TwitterShare to FacebookShare to Pinterest
Labels: Dark and nasty Hong Kong horror movies, Seeding of a Ghost