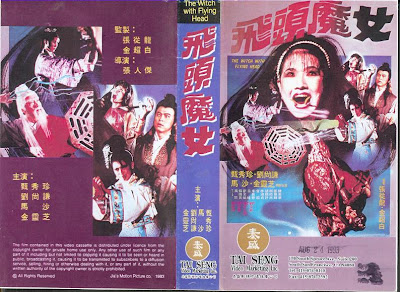 This must undoubtedly be one of the most rare Asian films and video tapes!

WITCH WITH FLYING HEAD isn't available ANYWHERE!!! There are no DVDs, no video-cd's, no laserdiscs, nothing but the faint memory of some very few long lost video releases. This is actually the only release that I'm aware of but a few years back I got some third hand hearsay info that there might have been a Vietnamese video release at some point. In any case, none of them had English subtitles I don't think and I'm not aware of any fan subbed versions.

And before you ask: No, I don't own this tape. I would sure love to! The scan comes courtesy of Jean-Claude Michel from Cinehound forum. And he doesn't own it either but was lucky to get a friend who owned it to make him a scan just before he himself sold it off again. Who knows where in the world this copy is now!? A while back I asked Pete Tombs of Mondo Macabro if this where a film they would consider for release and he said they'd love to but they couldn't find neither a print nor the copyright owners!!! O_O

So for now I'm certainly holding on to my dvd-r bootleg that looks like it was sourced from a 3'rd or 4'th generation video tape.

The film's entry on Hong Kong Movie Data Base.
Posted by Jack J at 10:03 pm