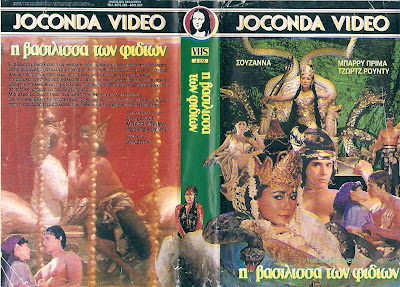 Re-post from 2008:
Tonight I won this Greek video release of SNAKE QUEEN (or as it's known in Indonesian: Nyi Blorong) on ebay!! Woo-hoo!!! For a couple of years I've had a bootleg from Shocking Videos (taken from the Greek tape) and I never thought I'd get hold of the original tape! Well, sometimes you're just plain lucky. And even more so as almost no one (I guess) discovered the auction. Woo-hoo (again)!! SNAKE QUEEN is from 1982 and is directed by Sisworo Gautama Putra who also did two more films in the series; PERKAWINAN NYI BLORONG (1983) and PETUALANGAN CINTA NYI BLORONG (1986). They all star Suzzanna (sometimes spelt Suzanna). There were also later Snake Queen films but with different actresses. The tape is letterboxed and has English dub. Actually it's the only English dubbed version in the world! A truly great find (and win).
Posted by Jack J at 6:35 pm