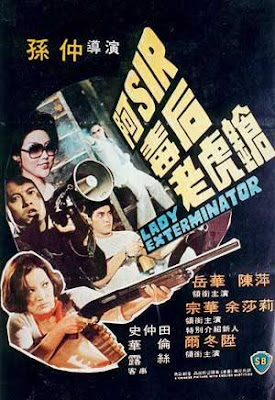 Now, if there's a film that really, totally, uber-ly, fits the bill on this blog it's this film! Talk about obscure!! LADY EXTERMINATOR is the sequel to DRUG CONNECTION (aka Sexy Killer) but whereas the original movie is fairly easy to get hold of (as it was released on DVD and VCD by Celestial in HK, unfortunately now OOP) very few fans have watched the sequel due to the simple fact that it has NEVER been released in ANY home-cinema format anywhere! Never! Ever! There's no old video tapes from Greece or OOP VCD's from HK, or even an old deleted laserdisc. Nope. Never released!!!

It ran in the HK cinemas back in the day but it wasn't very popular and I suspect the film makers didn't even intend it for the Hong Kong home market but mostly for overseas sales as the first film had done quite well in foreign lands. But altho it has never been officially released to home-cinema sometime in the 80s (I think) someone snug a camera into a cinema and filmed a copy of LADY EXTERMINATOR while it played (my guess is it was probably somewhere in Africa as the print is dubbed in English and has Arabic and French subtitles)! This bootleg version is doing the rounds among collectors but needless to say the print is terrible; Missing picture info on ALL four sides and the sound is, well, what it is. :/
But even so it's sure fun to watch a film which is THAT rare!

I think Global Video in South Africa may own a copy of the film on either 35mm or 16mm as the owner asked members of Cinehound forum if they could help out with cover scans a few years back. Most of his prints seem to be HK films and spaghetti westerns so there's a good chance his "Lady Exterminator" is the HK film - but it could also be the Indo film. But in any case he never released it and I highly doubt he will by now.
Posted by Jack J at 2:07 pm