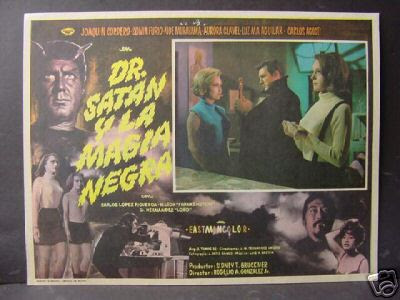 Ay, caramba! I watched this on bootleg dvd last night and what a swell horror movie it is!! It's the second film in a short running DR. SATAN series (it only ran two films!) and unfortunately I haven't got the first one.
The plot: The devil, El Diablo, pays a visit to Dr Satan who is an evil dude and tells him he needs to go to Earth to deal with another evil dude who's working on a formula to turn ordinary metal into silver. Or gold. To take over the world. Or something along those lines. My Spanish isn't as good as it never was anyway. lol. Now I wish I'd paid more attention in class all those yrs ago. :(
Oh, and the second evil dude is also one of the los vampiros by the way. And there's some of those niiice women you always see in old Mexican movies. In this one they've been turned into mindless zombies by the evil vampire guy (zombies but pretty ones, not rotting with maggots, LOL).
Anyway, very enjoyable even without subtitles. As far as I know it was never put out on dvd but the boot looks fine. It's off a Spanish lingo vhs.
- And there's the fakest vampire bat I ever saw!!

EDIT: the US video release is from SWV and is also presented in Spanish without subtitles. After I wrote the above review (for Cinehound forum in 2009) I got hold of the SWV video release of both DR. SATAN films. Apparently there are fan subtitled versions of the films on a torrent site but I don't have those versions. 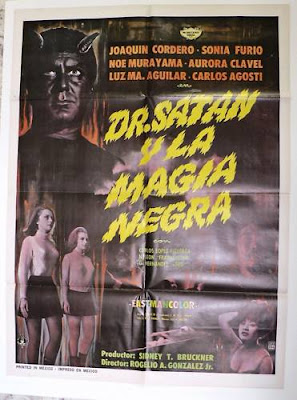