My friend Hans-Jørn found this rare and VERY obscure trailer for Bobby A. Suarez' film HITMAN (aka American Commandos / Philippines, 1986) on a Danish ex-rental video tape! It's obscure not least because it plays out as a music video instead of an actual film trailer!! And an even more obscure twist is that HITMAN was partly backed by Danish financing as it was produced by Danish producer Just Betzer. Betzer is also credited as executive producer on Suarez' SEACHERS OF THE VOODOO MOUNTAINS (aka Warriors of the Apocalypse / Philippines, 1985). The music is composed by Danish composer Ole Høyer and the female singer is Danish/American Debbie Cameron who was "world famous" in Denmark thru out the 1980s. 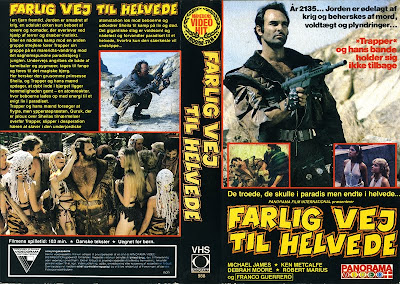 SEACHERS OF THE VOODOO MOUNTAINS on VHS from Denmark. It would have been fun to interview Just Betzer about his collaboration with Suarez but unfortunately he passed away a few years back.

It's interesting to see that these films aren't even listed in his credits on the Danish Film Institute site. Danes who get famous for work overseas don't necessarily get any love for it on home-soil. The same goes for Anders Hove; Every little vampire movie fan in the US knows and loves him for his awesome vampire character Radu in the SUBSPECIES films. Nobody in Denmark gives a fuck about that and these films are usually not even mentioned when his films are listed on Danish film sites. Instead people talk about his work in TV Christmas calender shows for kids, etc. How very sad!

And one more thing in regards to Just Benzer; Yesterday, I received DarkSky's new (very cool!) DVD release of Suarez ONE ARMED EXECUTIONER and CLEOPATRA WONG and in Andrew Leavold's interview with Bobby Suarez he talks about a Scandinavian film director who came over to visit him in the Philippines and who wanted to buy Bobby's camera (he didn't sell it tho). I wonder if that might have been Betzer? 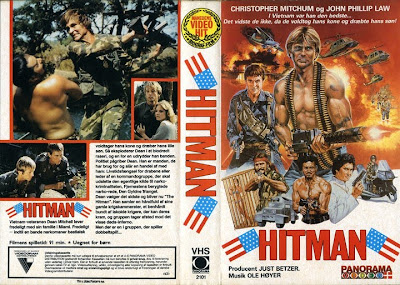 (VHS, Denmark) Thanks to Diabolik for uploading (and re-uploading) the trailer to YT for me! Cheers mate!! This is a re-post that was originally posted on WHEN THE VIETNAM WAR RAGED... IN THE PHILIPPINES blog in November, 2010.