AWE goes WORLDWEIRD to release THE LIVING CORPSE and HELL'S GROUND this summer! 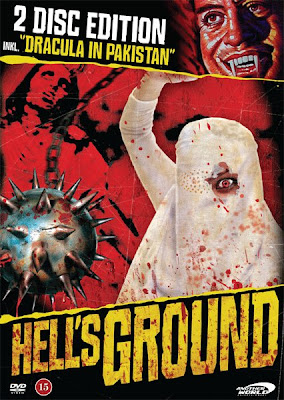 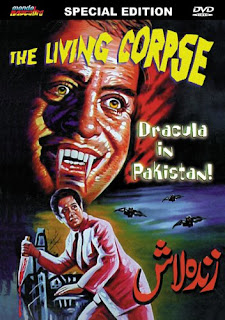 Gee, wauw!!! Another World Entertainment (AWE) in Scandinavia are planning to release Khwaja Sarfaraz' ZINDA LAASH aka The Living Corpse (1967) and Omar Khan's Mondo Macabro produced ZIBAHKHANA aka Hell's Ground (2007) on a double disc in June!!!

Did I hear you say "important"? Why yes you did! ZINDA LAASH/The Living Corpse/Dracula in Pakistan is important as it's the first movie from Pakistan to ever receive an X rating! The movie was even banned when it was originally released! And then it was almost lost for good. 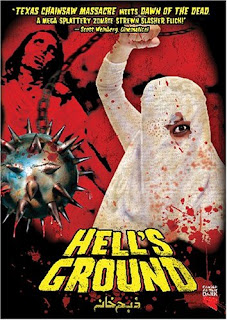 The print that survived was literally found by Omar Khan on top of a trash can in an flooded basement!!! Mondo Macabro and The Hot Spot (Omar Khan and his brother's company) restored the print and it was released on DVD from Mondo Macabro in 2003. I certainly hope AWE enclose Omar Khan & Pete Tomb's commentary track!

HELL'S GROUND, the second film on AWE's upcoming DVD, was actually directed by Omar Khan! It's from 2007 and it's a Pakistani zombie movie! Yay!! Mondo Macabro co-produced it but didn't release it, it's out on Danger After Dark in the US. THE LIVING CORPSE/HELL'S GROUND DVD is also scheduled for release by Njuta Films in Sweden.

I must admit I'm slightly baffled as to why THE LIVING CORPSE is the bonus film on the disc... o_O ...as it is the better film of the two! I recommend that you read Omar Khan's review of THE LIVING CORPSE on his The Hot Spot review site. By the way, if you have any interest in Bollywood or Lollywood* films The Hot Spot is an awesome site for info!
*Lollywood is the Pakistani equivalent of Bollywood.

HELL'S GROUND is indeed a fun movie, and it's interesting (and cool) because of its origin (i.e. being Pakistani) but THE LIVING CORPSE is head and shoulders better; Its allure goes way beyond being interesting just for the sake of its unusual background. It is a very good adaptation of the Dracula story on its own terms and I highly recommend it! Trust me, I'm a professional and I know what I'm talking bout. Now, smell my finger. 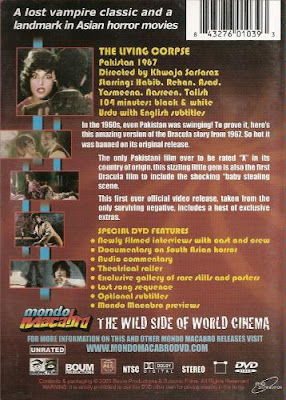 
In the 1960's, even Pakistan was swinging!
To prove it, here's this amazing version of the Dracula story from 1967. So hot it was banned on its original release.
The only Pakistani film ever to be rated "X" in its country of origin, this sizzling little gem is also the first Dracula film to include the shocking "baby stealing" scene.
This first ever official video release, taken from the only surviving negative, includes a host of exclusive extras.

Zinda Laash - The Living Corpse - is a film so rare that even the most exhaustive studies of vampire films don't mention it. Although the film caused a sensation on its release back in the 1960's, it was banned and all but forgotten...until now!

An absolutely essential purchase for vampire film afficionados...for horror film fans...and for anyone who likes their horror hot and spicy.
A LOST VAMPIRE CLASSIC AND A LANDMARK IN ASIAN HORROR MOVIES