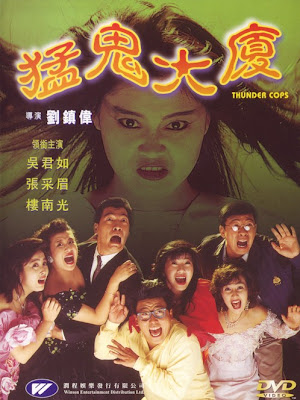 OPERATION PINK SQUAD 2 is an over-the-top horror movie filled with Hong Kong slapstick along the lines of HAUNTED COP SHOP 2. And for these movies the slapstick works perfect!

The first film in the series, OPERATION PINK SQUAD, is a fun action film but I must admit it's been so long since I last saw it that I don't actually remember anything from it. But the sequel is a lot of fun and it's definitely the one to watch if you're only gonna get one of them!

Now pay attention! Unfortunately the Hongkongese find pleasure in throwing their films into English title Hell! The original English language title for this series is OPERATION PINK SQUAD but for some obscure reason the sequel was re-released as Thunder Cops omitting the link to the first film. And then they filmed to sequel called THUNDER COPS 2!! So the middle film has a predecessor and a follow-up but the first film and the third film are not part of the same series. Confusing? Well, it gets worse: 10 years after the third film they made yet another film and... obviously... called it THUNDER COPS. O_O
I should point out I have no idea if the company behind film #4 is the same that made the other films or if the story line is linked to the first films in any way what so ever. Argh!!!