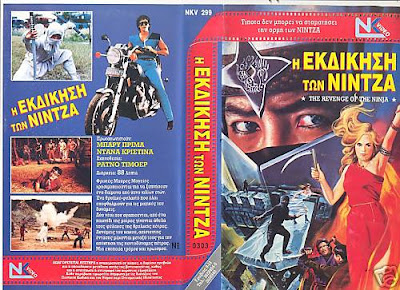 I watched the wild no-holds-barred Indonesian movie REVENGE OF NINJA tonight. It stars the Capo di tutti capi (the boss of bosses) of insane Indonesian cinema of the 1980s; Barry Prima!!! Other top names in the movie are Dana Christina and Advent Bangun. If you know your way around Indo flicks these names won't be alien to you that's for damn sure. LOL. And the whole non logical and fantastic mess is directed by Ratno Timoer who also among tons of other amazing Indo films made JUNGLE HEAT (which also stars Barry Prima and Mr Rambu hisself Peter O'Brian), DEVIL'S SWORD, and THE BLIND WARRIOR. 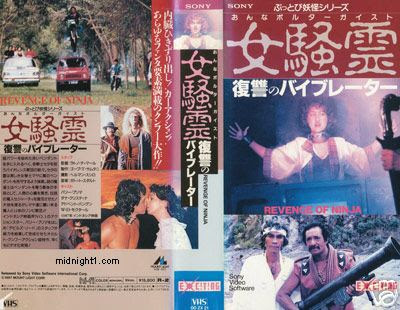 This is not a review (I'll probably publish an incisive "Encyclopaedia of Over-the-top Indonesian Films" coffee table book at some stage, haha. Suffice to say if you liked THE DEVIL'S SWORD (out on a VERY nice DVD from Mondo Macabro) you're gonna like this one too. It's just as wild and the difference between the two is basically that REVENGE OF NINJA is set in the present. Or is it? I have a feeling the script writer kept forgetting that MINOR detail while he jotted the script down on the back of a beermat, haha. I own the rare Greek video release but the copy I watched tonight was a DVD-r from Trash-online.com (also located in Greece) which carries the Japanese version which is fully letterboxed. The Greek tape is unfortunately fullscreen. Needless to say there is no official DVD release of this and it's most unlikely there'll ever be any. Boo-hoo.

Despite the ninja on the cover of the Greek VHS this Indonesian movie is not to be confused with a film of an almost similar title: Revenge of the Ninja (directed by Sam Firstenberg and starring Shô Kosugi).

The stars of THE DEVIL SWORD return in another outrageous Indonesian adventure! An army of scumbags armed with machine guns and rocket launchers attack a magician who possesses a magic necklace. They mange to take it from him but later it proves that its not the real necklace. That's when all hell breaks loose... REVENGE OF NINJA hardly has any ninjas but is packed with non-stop trashy violence and delivers everything you can expect from an Indonesian action film: huge explosions, tortures, beatings, unbelievable fights and the usual atrocious dubbing that you can't help but love! Our print is an ultra-rare Japanese import and is fully scoped unlike the Greek fullscreen print. Not to be missed!

Email ThisBlogThis!Share to TwitterShare to FacebookShare to Pinterest
Labels: Indonesia, Revenge of Ninja