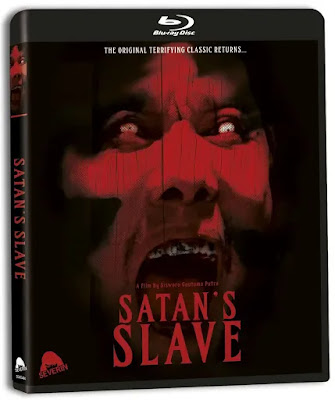 On may 26 Severin are going to release Sisworo Gautama Putra's PENGABDI SETAN aka SATAN'S SLAVE on blu-ray in the USA. This is indeed fantastic news!!!

The ONLY English friendly release of the original 1980 film so far – worldwide – is the old long gone Brentwood bootleg DVD which was sourced from the old - also very rare – Japanese VHS tape. The tape is letterboxed and the bootleg DVD has English subtitles in the black bar.

But now... we get a blu-ray!!!!! (yes, an unheard-of number of exclamation marks – and it's indeed called for!) This is indeed great news (yes, I said that already and I'll say it sagain so you'll understand this is indeed a great piece of news!). You can preorder here.


I haven't watched the film for a long time but I remember it as being a cool watch. It's not a masterpiece by any means. However, it it's a cool worldweird horror film from a country that we don't see too many horror films from in the West.

It's a film that Jared Auner certainly would have written about on his old Worldweird Cinema blog a long time ago. Jared's last post on his blog was 9 years ago, it was partly about the (very cool) video label Mondo Macabro, and incidentally he is now with that very same label! A label that has given us quite a few cool films from worldweird territories. Hopefully, we'll see more films like that from MM and Severin.

I highly recommend you preorder/buy PENGABDI SETAN and convince the label to put more money into releases of this sort.

I'm not too fond of the cover for the upcoming release, the old Malaysian VCD cover (also used for the Japanese VHS) looks heaps better but, hey, it's just a cover. The most important thing is we get the film! xD

SPECS FOR THE UPCOMING BLU-RAY: