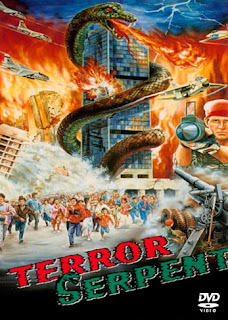 UPDATE (2016) - Attackafant doesn't exist any longer and the release of THUNDER OF GIGANTIC SERPENT is cancelled for good! Dead!! Gone!!! Not coming out!!!!

Back in 2011 I wrote about Fred Anderson's (then) new video label, Attackafant Entertainment, and its first two releases; KILLER ELEPHANTS and THUNDER OF GIGANTIC SERPENT.

So far only KILLER ELEPHANTS has been released and a few months ago Anderson posted on Facebook about chucking in the video label due to very few sold copies. I asked about an official statement in regards to the label's future but Anderson's reply was that nobody would be interested anyway. I assume that means the label has been laid to rest. EDIT: although I have no info in regards to the future of the label as such there is a correction in regards to the release of SERPENT in the post after this one. Go here or scroll up.

Maybe a better distro would have helped or a direct sales option. Code Red is surviving altho Bill Olsen has chosen to only sell his releases via direct sales from his eShop. Bill Barounis kept his Onar Films label afloat altho at one point only one store wanted to distribute his dvd's. Like Bill Olsen, Bill Barounis also chose to do the direct sales thing (via eBay and a web-shop).

Anyhoo, I'm tired of waiting so today I've ordered the (seemingly) cancelled film, THUNDER OF GIGANTIC SERPENT, via a bootleg dvd from eBay. I'm aware Global Video in South Africa used to sell a dvd of the film at some stage but it seems it's completely impossible to order anything from that label nowadays. Their communication skills leave a lot to be desired (i.e. there is none!) which is a pity as their print is probably from a real film print. The eBay bootleg might very well be off a vhs.

EDIT: The eBay bootleg is sure enough off a vhs - and comes with big Greek subtitles, haha.
Posted by Jack J at 2:18 am