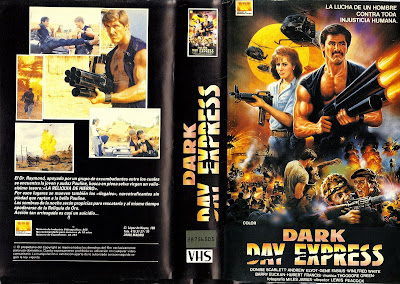 When Hong Kong movies became the new fan flavour among horror and action movie fans 20 years ago little was known about the Gwilo (i.e. white) actors who starred in many of these movies (usually as bad guys). Nowadays most info about these white HK actors is well known territory. However, there's still stuff to be discovered! A stone-throw from HK is Thailand and one of the Gwilo actors (altho they undoubtedly don't actually use that phrase there, LOL) who starred in many Thai action films is German born he-man Christoph Klüppel.

I've seen him on numerous video and VCD covers but I never knew anything about him - and neither did you. Well, why don't you leave this hell-hole and jump over to Fred Anderson's blog, NINJA DIXON, and check today's post out. Fred just fucken interviewed the guy!! Very cool indeed! Klüppel was in films such as IN GOLD WE TRUST, THE LOST IDOL, MISSION HUNTER 1 & 2, and SATANIC CRYSTALS. The interview is very long and Fred says he's gonna split it up and post segments every day for a week or so.
For the interview go here!

Check out Klüppel in this rare trailer for the equally rare English language version of DARK DAY EXPRESS: