"...there's a blacksmith who knows a little about medicine..." 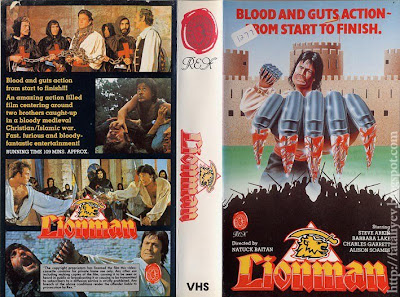 This afternoon I watched Natuk Baytan's Turkish film LION MAN (aka Kiliç Aslan) from 1975 and it's without a doubt one of the most entertaining Cüneyt Arkin films I've seen! This really needs a DVD release that's for damn sure!! Oh, and don't get fooled by this "Steve" Arkin, haha. It is indeed good ol' Cüneyt Arkin. Actually, the last of his movies I watched, KARA MURAT SEYH GAFFAR'A KARSI (aka Der Rächer des Khan) had him credited as yet something else, "George" Arkin, I think.

The version I got hold of is an NTSC video tape that was released in the US back in 1983 - so obviously it's totally obscure and difficult to get hold of these days. But try and see if you can get a copy somewhere, it's totally worth it. The tape is dubbed into English and fullscreen. LION MAN was also released in Canada and the UK but needless to say those tapes are just as difficult to find.

The plot is like this; We're back in the days of the Byzantine Empire. The proud Turks have been overrun by nasty and cruel Christian crusaders. Yes, that's right! In this film the Christians (which are easily recognised by their big crosses on their chests) are bloodthirsty savages and the proud Turks are the heroes. 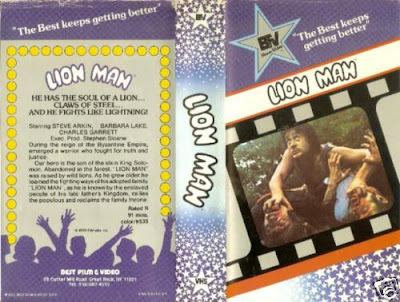 When you're someone who's born and raised on bloody Hollywood movies this is quite different. But never the less very entertaining and makes perfectly sense in my book. Just like you always root for the Chinese hero against the nasty Gwailos in a HK movie no matter how white you are. LOL.

Anyhoo, the Turkish emperor is killed by slimy Europeans (probably French people, or ze Englisch) but somehow his wife escapes and isn't killed until their son is stolen by a lion! (I didn't know they actually had lions in Turkey but maybe they did in the olden days).

Anyway, much confusion later and the introduction of a dark-haired fair maiden (the same babatious chick who's name escapes me but who was also in THE BOY WHO KNEW TOO MUCH aka LITTLE EYEWITNES), and eventually the lion-boy becomes a mix of Robin Hood/Tarzan/Barry Prima ! 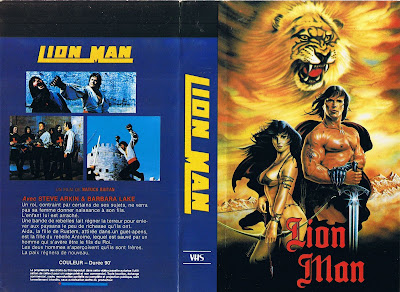 This is really entertaining cinema if I ever saw any. Totally! And the film is quite gory too! The only down-point is the ANNOYING orchestral elevator music score! But I can live with that and I plan on watching this again. You should do the same. Apparently, the dubbed print is slightly different to the Turkish version (don't worry it's not cut) I haven't watched it but reportedly it's nothing serious.

By the way, the Turkish title for LION MAN is indeed Kiliç Aslan. Don't believe this "ASLAN ADAM" that the bloody IMDb will tell you! Thanks to Ayman Kole for pointing out the IMDb screw-up.

PS: The headline is a quotation of some of the rad dialogue! I mean you have this scene where Cüneyt Arkin's character has been truly and severely fucked up by the bad guys, and some guy suggests they go to the blacksmith of the nearest village because he knows a little about medicine, hahaha.

Thanks to Gokay of Ciko for the UK scan. Much appreciated!

Added French VHS scan (5/8/09): I love how the characters on the front cover look nothing like in the film, LOL. Thanks to Lurker of Cinehound forum for the French scan.