aka WOLF DEVIL WOMAN 3
aka PHOENIX THE NINJA 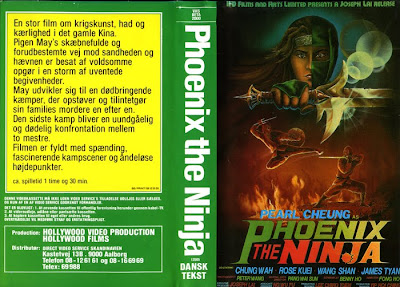 Third entry to this wacky and don't-blink-or-you'll-miss-something-awesome series from Taiwan starring the wacky Pearl Cheung Ling (aka Pearl Chang).

According to the film base OFDB the international version of the film under the Phoenix the Ninja title is somewhat cut. The data base lists the Ocean Shores laserdisc as uncut but whether this info includes the Ocean Shores VHS and VCD I don't know. It's likely all three formats are the same but knowing Ocean Shores I wouldn't put my money on it. They've often released different cuts on their various formats (even with the same cover and all). THE RAPE AFTER is cut on VHS but uncut on VCD. Go figure! I own the (very rare) Danish VHS, the English dubbed Ocean Shores VHS, and the Mandarin VCD (sadly sans subs) also from OS, and obviously someone ought to compare all three versions. I'm waiting for someone else to do it. LOL.
Posted by Jack J at 6:24 pm