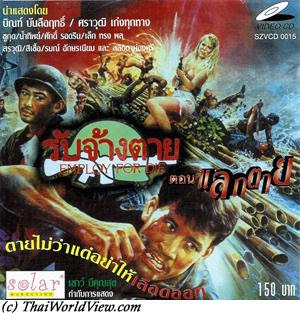 Calm now, Jack!! Sergeant Rock just sent me this scan which is of a video-cd and it's a SEQUEL to CANNIBAL MERCENARY!!!

The original film is from 1988 and this sequel is from '89!! The VCD carries the same Thai English title as the first one EMPLOY FOR DIE with an added "2". What a piece of fucken awesome news!!! Unfortunately it's probably gonna be very (like in veeeeery) difficult to track down a copy. Most likely this Thai VCD is the only release there is. Last year I spoke to an American who runs the TK Worldwide DVD eBay store outta Thailand, I asked him about some specific titles and he said there are tons of new VCD releases all the time and they disappear right away. But at least we now know it exists!!!


Here's a rundown of the plot. It's from the same site that the cover scan came from. And I don't think the writer was especially happy about these films, haha. But it'll give you an idea of what the film is about.

"Once again, Leu is ordered by his boss to form a mercenary team to stop drug propagation in Thailand and get rid of a dangerous drug lord, called Bad dog, protected by scores of tough men. It could be a "seven mercenaries" Thai remake. Six former soldiers join. Every team member has a reason to join, i.e. need 300 000 baht to cure a sick mother... They go inside the jungle. They are on unofficial mission so even the police and army can shoot them. They are mercenaries so they are employed for die. During the progression in the jungle two mercenaries die (through machete and acid bath). On the way, they help lost migrants including one lady with a baby. During the final face to face with the drug lord, all his teammates die. Leu would like to exchange his life (แลกตาย) with them as he promised that no team members should die. This is a typical 1980s Thai war movie with few interest. The action sequences are not credible enough. During the anti-communist years, movies with soldiers and mercenaries fighting in the jungle were popular. Most of these movies were low-profile, though some were popular as they played to the national sentiment. At the end of 1980s, when the communists were defeated, such action films faded."

This is a re-post from yesterday from my other blog (one of them, LOL) but since the original CANNIBAL MERCENARY entry is probably the most popular and googled on this blog I might as well post it here too. If any of you have this VCD please get in touch!
Posted by Jack J at 6:08 am