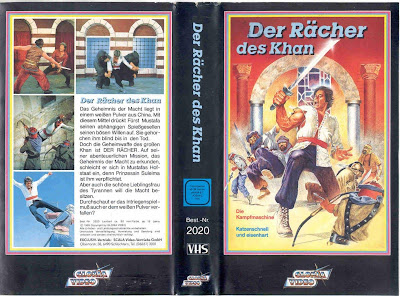 I watched the Turkish adventure film KARA MURAT SEYH GAFFAR'A KARSI last night. It stars Cüneyt Arkin as a hero fighting an evil dictator. The film was the last part of an ongoing series that ran between 1972 and '76. The series contains these films:

Mostly you're left in the dark as to what's really going on in Turkish genre films as so few of them are dubbed or subtitled into other languages but fortunately KARA MURAT SEYH GAFFAR'A KARSI has been released on VHS in Germany so for once I could actually follow the plot closely.

Anyway, this isn't a review so suffice to say the film contains lots of action, violence, nudity, and Cüneyt Arkin doing what he does best: ridiculous stunts!! LOL. In one scene Arkin is fighting two crooks. He knocks one of them unconscious but the other one tries to escape on a horse. Arkin picks up the unconscious guy and throws him at the guy on the horse (and hits him even though he was riding away at full speed!!). Haha. Great stuff. In other scenes Arkin flies thru the air as if there's no gravity laws. Very enjoyable! :D

Next up in the world of wild flicks from Turkey at Casa J cinema is LIONMAN (aka Kilic Aslan) which I recently scored on English dubbed NTSC VHS. Yay!

Thanks to Ayman Kole for info about the Kara Murat series. And also thanks to "Joe" for the info on the Turkish/Persian co-production (they are both Turkish Aussies and they both live in Sydney and yet they have never met, haha.).

Re-post from 2009. If you wish to check my Turkish posts on the old blog I've collected them here.
Posted by Jack J at 1:26 pm