MACHETE MAIDENS UNLEASHED on dvd in May and it includes THE MUTHERS!!! 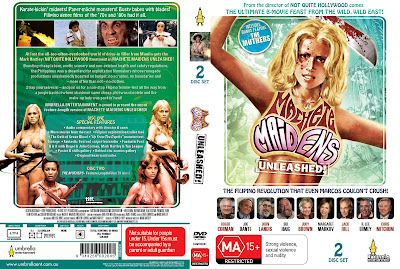 [Click scan twice to see it in all its full glory]

Simon over at EXPLOSIVE ACTION just shot me an email saying MACHETE MAINDES UNLEASHED... i.e. the cool documentary film on American-Filipino co-productions made in the Philippines (and the sequel to NOT QUITE HOLLYWOOD - The Wild, Untold Story of Ozploitation!)... is going to get a DVD release from Umbrella in OZ in May.

And get this: as a *small* extra feature the DVD is also gonna contain Cirio H. Santiago's THE MUTHERS from 1976!!! The film stars Jeannie Bell who was also in T.N.T. JACKSON which I've written about before.

This is certainly good news. There's more info on the Twitch site and it states THE MUTHERS will be anamorphic 16:9 format!! Awesome!!! My old Danish VHS is fullscreen and way too dark so an upgrade is highly welcome.

And big thanks to Simon! Do check his site and he's on YouTube here.
Posted by Jack J at 12:00 pm