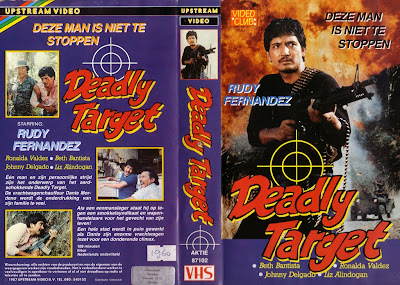 Ahh, joy, bliss, heaven! I received this awesome ex-rental tape from Holland yesterday. It's a VERY rare release of a VERY rare Rudy Fernandez revenge flick from the Philippines. I was told there was only a censored German dubbed VHS release of this but fortunately that turned out to be incorrect. A reader left a message over on my When the Vietnam War raged... in the Philippines blog and mentioned there's also a VHS release in Greece!

So far I've only skimmed thru the film but it looks highly entertaining! The film runs a whooping 1h50m!! Thanks to Petcor80 from Cinehound for the awesome trade!
Posted by Jack J at 7:59 am