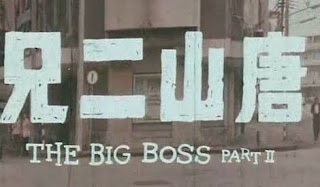 A couple of days ago someone over on Kung Fu Cinema forum mentioned that *someone* (undisclosed) is offering to sell a 35mm print of Chan Chue's THE BIG BOSS PART II starring Lo Lieh & Bruce Le (i.e. the official sequel to THE BIG BOSS, not to be confused with several retitled films) for a mere sum of 15,000 dollars. So it seems someone else but the cinema in Zambia has a copy. Of course, whether this will eventually make it to DVD is anybody's guess. I doubt any private fans are willing to come up with that kind of money.

PS: the screen grab in this post isn't from a film print but from the trailer.
Posted by Jack J at 12:41 am