This is a review that I wrote for my zine Banned in Britain #2 in 2004 [if you saw this when I first made the post you would've seen I mistakenly wrote "1994" which isn't correct. My first issue came out in '94 but the review wasn't printed till 2004]. You can download the entire issue from my other blog HERE. We also have a thread entirely devoted to the film over on Cinehound. Go HERE. 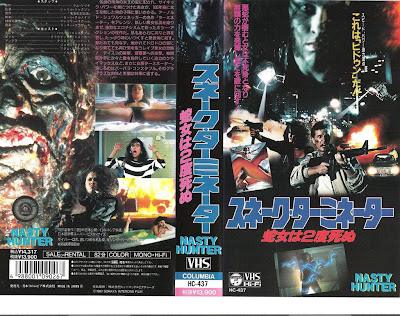 VHS/Japan/letterbox/English audio/Japanese subs/this is the fully uncut print which contains bits and pieces that are missing from the Mondo Macabro DVD.
[click scan for full size]

I’ve been hoping for a proper release of Lady Terminator ever since I rented a PAL copy off an American NTSC bootleg video tape a couple of years ago at a video rental in a seedy part of downtown Copenhagen. Obviously I made a copy off the rental tape and I reckon the version I was left with is a fuzzy 4th or 5th generation copy (on top of being a transfer from NTSC) - in other words not a brilliant copy, ha, ha.

Actually it was so unbelievably bad that I never even bothered to pull it out to watch again. I loved the film but thought it deserved to be watched in a better quality. And a version with a mucho better quality is exactly what I’ve got in my greasy paws now: The amazing brand new DVD from Mondo Macabro in the UK (although they chose to put it out on their US branch).

‘But what exactly IS an Indonesian film’ (well, apart from it being from Indonesia obviously) I hear you utter. ‘Is it like a Hong Kong movie or what?’ Well, I’ll tell you what, I haven’t got all day so why dontcha just rush out and get hold of Pete Tombs’ great book ‘Mondo Macabro’ and let him tell ya all about it, hah! (I’m so funny I kill myself). No, seriously, I’ve only got two pages left (pages that were actually earmarked for an incredibly cheesy BRMC interview but as soon as I got hold of THIS new release THAT interview went into the toilet!) so I’ll try and give you a crash course in Indo flicks but it’ll be brief and since everything I know about Indo flix I got from the Pete Tombs’ book anyway I still urge you to go get his book!

The Indonesian government was apparently mucho corrupto in the 1970s and what do you do if yer a corrupt government? Well, you slack off in the moral dep. and thus film censorshit regulations loosened up and the sleazy film exploiters that we all know (and whose products we fester on) from other parts of the world soon popped up everywhere in Indonesia too. Films with gore, action and (to a lesser degree) sex came out by the bucket load.

Well apparently cos I haven’t actually watched very many of these flicks myself, just a handful - but what a handful! And according to Pete Tombs’ book, the Indo flicks became more and more outrageous as the 70s switched to the 80s. But in 1988 a film came out that apparently was so crude it made the Indo film regulators choke and, sadly, introduce new censorship rules. That film was Lady Terminator! Actually, when the authorities found out how over-the-top Lady T is they banned it right away. But although it only ran for nine days at the cinemas more that 100,000 people saw it!

As I said before, I haven’s watched very many Indo flicks (as of yet but after having watched cool stuff like Lady T, Devil’s Sword, Mystics in Bali, Queen of Black Magic and a few other ones you can bet yer ass I’ll be tracking more down!) but so far it seems to me that some Indo flicks are very much like the early 80s HK horror flicks, just without the slapstick! And also, it may be hard to imagine but they’re done even more cheap!

If you’ve seen stuff like Black Magic With Buddha (which I reviewed in #1 ten years ago!), Blood Of The Black Dog or The Rape After then you know what I’m talking about. Well, some of the Indo flicks are like this while others are... different... ehh, well, mebbe this isn’t such a grand explanation - as I said, go get hold of Pete Tombs’ book (they have it at Amazon). By the way, there’s also a quite good documentary (from the Mondo Macabro tv series from UK tv) on the disc. Needles to say it’s compulsory viewing!!

The first time I encountered a bit of exciting Indo celluloid was when Discovery Channel showed a docu (sorry, don’t remember the title) on horror movies for Halloween some time back in the 90s. A short segment from a film showed a guy who suddenly pulled off his own head in gory detail in the middle of a crowd! The film was Queen of Black Magic (which, in some markets, is released as part 3 of the Hong Kong Black Magic series although it’s got nothing to do with those [totally awesome] movies) and it’s got gore, black magic and flying heads galore. See it if you can!

Anyway, enough of this babble, lets habla a bit about the damn movie itself then we can always come back to this pointless drivel later, shall we!
As you can probably figure out yourself Lady Terminator has something in common with the ol’ Arnie favourite, however, we’re not talking some mere inspiration here, we’re talking a fucken remake... a remake done Indo style - incl. a babetious 80s chick in Arnie’s role! And she isn’t even an android!! 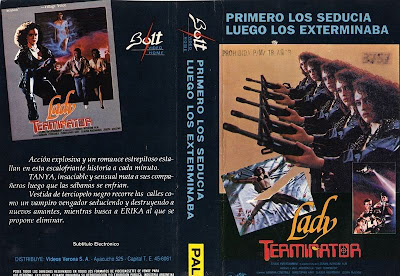 The story goes a bit like this: 100 years ago there was a queen called ‘Queen of the South Sea’ who would lure scores of men to bed but none of them could live up to her expectations and they would all get killed ‘in the act’. Well, until man no. 1000 figured out the trick: when she would ‘ride’ her man a snake would slip outta her pussy and kill the unfortunate guy (ouch!).

Jump to the present (well, mid 80s!). A young, sexy American chick with big, curly 80s hair (actually she looks like a girl I knew once who, as it turned out, was trouble too, ahh) is in Indonesia to study the legend of the ‘Queen of the South Sea’. The legend says that soon after the Queen’s demise her castle went into the sea, and although the young, sexy American chick with curly 80s hair doesn’t believe the part about the Queen she oddly enough believes the part about the sunken castle (no, it doesn’t make sense - just don’t think too much about it and enjoy the film!).

The young, sexy... etc. soon finds some old geezer who owns a book about the whereabouts of the old sunken castle and to make a long story short she rents a boat with a crew, dives down and is possessed by the old South Sea Queen! This is when the fun begins!

The sexy chick returns from the sea, her own mind is now gone and she has fully become the incarnation of the ‘Queen of... etc.’ She puts on a leather jacket, a bra and an AK47 - and then she goes to work, i.e. looking for the doomed great granddaughter. The rest is a tour de force in over-the-top gory exciting exploitation action!!

The film is a remake of The Terminator - and it’s not! The plot is kinda the same, but most of the details are explained differently: No one comes back from the future, there is a terminator but it’s not a cyborg. The terminator pulls out it’s own eye but it’s not a mechanical one. The person behind the terminator doesn’t wanna change the future... she’s just royally pissed off because she couldn’t kill her fuck no. 1000!! And so on. The story-line is very much the same, the details are just very different.

Also, what is totally over-the-top fun are the scenes that are carbon copies of the original: The scene when the great granddaughter is attacked the first time in a bar and saved by a guy - in this version an American cop working in Indonesia (!!!) (for fuck’s sake, he even says the legendary line: ‘If you wanna live come with me’!!). And there is the police station scene where the terminator basically destroys the whole station and kills everyone except her main target.

On top of all this, Lady Terminator is both quite gory and there’s quite a few scenes where the sexy terminator takes her top off (uh, since this IS an Indonesian movie I guess I should point out that I don’t mean she takes her head off and it flies away - but that she takes her shirt off! Ahm...).

About the gore; there’s one totally rad scene at the police station in which Lady T guns down a cop, but hey, although he’s dead she’s not satisfied, so she shoots him again, in fact she blows him into a bloody pulp... but she’s still not happy, so she puts a last touch on killing him by kicking him in the balls!! I guess you’ll have to be a gorehound to enjoy films like this! (but hey, why else would you be reading this here mag?).

What else can you say about this awesome piece of gory exploitica. Well, heaps probably but unfortunately we’re out of space this time ‘round, but I URGE you to get hold of this flick. It is totally o.t.t. amazing and VERY enjoyable. But before I finish off I just want to comment on a review in Oriental Cinema vol. 2, #9. Some fuck-face reviewer (not the overly cool editor Damon Foster, mind you!!) bitched about Lady Terminator being without any creativity and stealing ideas from an American film!

Firstly, I think it’s funny that this criticism comes from an American of all nationalities!! I mean, it’s not like we have NEVER seen or heard of an American film that bluntly stole everything from a foreign film, is it?! Like, it’s only happened a billion times!! At the moment, the Yanks are about to remake every motherfucken horror film ever made in Japan!! And how about Nikita!? How about Godzilla!? How about The Vanishing!? How about a zillian-trillian other Asian and European films!? They even remade Faulty Towers for fuck’s sake!!! Besides, this ass-wipe reviewer seems to forget that stealing from big blockbusters and remaking them for peanuts, adding tons of gore and sex THAT IS WHAT EXPLOITATION CINEMA IS ALL ABOUT YOU FUCKING MORON!!!

Anyway, enough of this (besides, the bloody wanker wrote that review eight yrs ago and has probably forgotten all about it by now, ha ha). Just don’t sit on yer arse and complain about my review being about a film from an uncool place like Indonesia or that it’s a remake. It doesn’t matter where a film comes from or whatever. What matters is whether a film is entertaining or not. I’ve watched Lady T five times and I’m gonna watch it again!
I’m off, see you next time. [new note: this was the last review in that issue, hence the farewell] 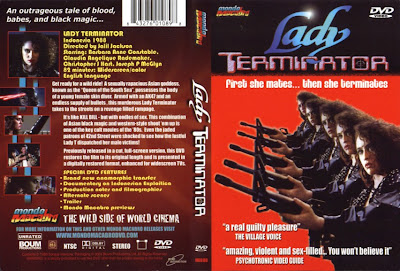 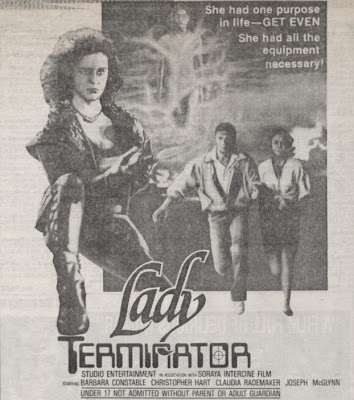 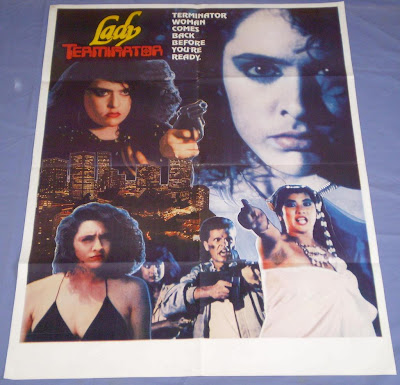 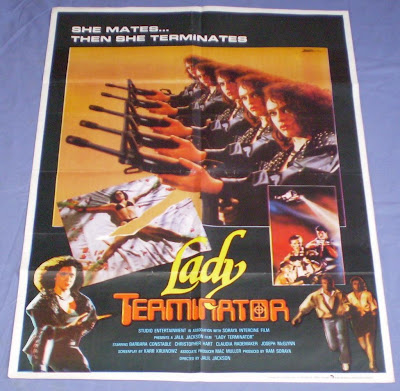 Poster/Pakistan
Posted by Jack J at 3:36 am