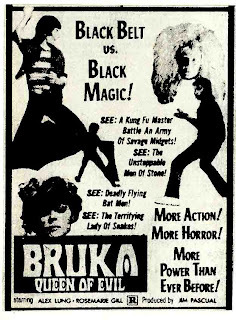 Go ahead and watch the above rare trailer for what seems to be a WILD Filipino snake queen movie!! There's dwarfs, flying batmen, brick monster-men, killer snakes left and right, a creepy decapitated talking head, nudity, and the lovely Maria Gil with a head full of snakes!!!

There has been some confusion between BRUKA, QUEEN OF EVIL and another film entitled DEVIL WOMAN. Both films star the same actress (Rosemarie Gil) in the lead role, and in both films she plays a similar "snake woman" character.

This has led some fans to believe they are alternative titles for the same film. This is not correct; They are two different movies. DEVIL WOMAN was released on VHS by Something Weird Video in the States and is fairly easy to get on bootleg. 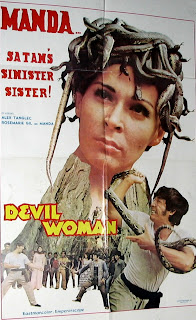 Unfortunately, it seems BRUKA, QUEEN OF EVIL is a lost film! Nobody has it!! So watch the trailer and boil your eyes out cos as of now that is all you're gonna get. :-(

At one point, I got in contact with someone who said they had a friend who had a copy of the film but I was unable to get a copy from him. Did he have a copy? Does a copy exist? Does anybody have a copy? I have no idea. If anybody out there has a copy or knows of one please get in tough. Cheers.

UPDATE: Check Andrew Leavold's comment in the comments section: He has found a copy of BRUKA!!! And it is now available thru download sites (and bootleggers are creaming themselves over it, obviously). 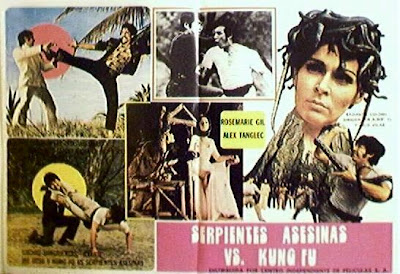 I don't know if Maria Gil became typecast in snake woman roles but the fact is she starred in several other snake films as well, altho she doesn't quite play a snake queen with a head-full of writing snakes for hair. In NIGHT OF THE COBRA WOMAN she plays the servant of a snake woman. I haven't seen BLACK MAMBA. These films were all made in the Philippines and are from the early 1970s. Maria Gil is still active and I believe she is currently working in television. 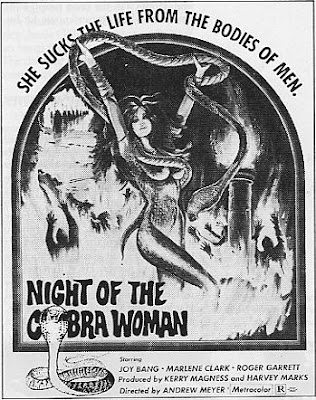 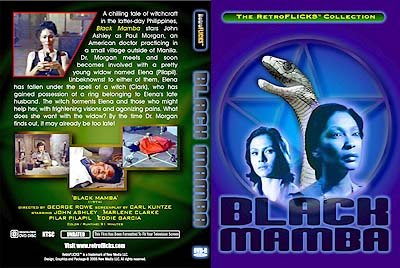 Apart from the Mexican lobby card (which I'm happy to report I'm the proud owner of) all scans are from Fred Adelman, thanks mate, except for the MANDA/DEVIL WOMAN poster which came from Mads Jensen.
Posted by Jack J at 2:00 am