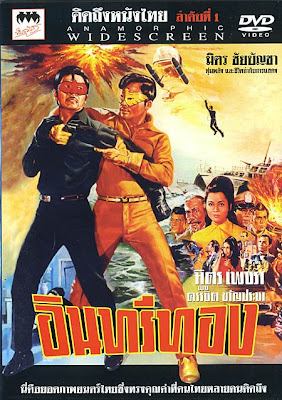 The Seventies and Eighties saw a number of Thai genre films - mainly kung fu movies, as was the flavour du jour - exported on cinema screens in the West, via international co-productions or by deals with Hong Kong distributors. Pre-kung fu era films from Thailand are another beast altogether, from a thriving local cinema that never travelled past its own borders, and from an industry that had no real interest in preserving its own heritage. It's a miracle the film has survived at all, let alone in its current choppy, mutilated, dragged-through-the-paddy-field version. However, there are subtitles, if you can forgive the translator's tenuous grasp on the English language AND basic typing skills.

Red Eagle (or Insee Daeng) was the red-masked vigilante hero of a phenomenally popular series of post-war Thai pulp novels. The first screen adaption in 1963 starred Mitr Chaibancha, without a doubt the most popular Thai screen idol of the Sixties. A former boxer, his athleticism fared well for action roles, and he performed most of his own stunts until his premature end...but more about that later. As a result, it's estimated Chaibancha starred in between a third and half of all Thai films of the period. That's literally hundreds of Thai films, the majority of which are lost to the winds of time, including an entire series of Red Eagle adventures.

Its final instalment, Golden Eagle from 1970, was produced and directed by its star Chaibancha, and it's an ambitious actioner from an all-round auteur clearly at the top of his game. By evening Mitr is Rome, a lovable if messy drunk, fraidy-cat and frequent social embarrassment to his faithful girlfriend Oy (Chaibancha's frequent co-star Petchara Chaowarat); once the mask is donned, he's a crimefighting dynamo, a super-patriot taking on all kung-fu kicking ladyboys, arrogant young communists and wizened fakirs plotting to overthrow peace, freedom and the Thai Way of Life.

In Golden Eagle, the bumbling “lush” discovers an impostor posing as Red Eagle, a member of the dreaded Red Bamboo Gang whose leader, the Fu Manchu-like Bakin, is psychically strangling the life out of extorted businessmen via a collection of red crystal Buddhas. And right under the nose of the police and Rome, too - while having dinner with the doomed Mr Serm, a box containing the deadly Buddha is delivered to their table. Rome warns him not to open it. “Who knows,” he suggests diplomatically. “There might be dog shits inside.” Shits, no, but instant death, leading our newly rechristened, golden-masked saviour through the lair of Red Bamboo associate Jiew Tong, the venomous embrace of his niece Benja, his effeminate army of pink-suited goons (straight from an off-Broadway musical reimagining of the USS Enterprise), to rescuing the pretty if ineffectual Rachanee and her kidnapped uncle Admiral in an admittedly spectacular finale at the hideaway of the hypno-master Bakin.

Straddling Superhero Chic with the Swinging Seventies, Golden Eagle is an impressive low-budget Batman-meets-Bond undermined somewhat with a low-rent humour chortling at the weak, the portly, the ugly and the girlish - you'll lose track of how many references there are to “faggots” (or “aggots”, according to the subtitles) and will either be amused or appalled at the ladyboy antics of Jiew Tong's household cavalry. Then there's the jarring, anachronistic soundtrack taken from the film's VHS release in the Eighties with a brand new soundtrack, as the original simply didn't exist. In fact, the dialogue and sound effects to most Thai films of the period were performed “live” by actors and foley artists hidden just behind the screens.

Despite its numerous technical shortcomings, Golden Eagle will forever be remembered as the crowning glory in Chaibancha's stellar career, and not for the usual reasons. The final shot of Golden Eagle was filmed in one take, with Chaibancha dangling from a helicopter's rope ladder to the strains of Where Eagles Dare's climactic theme. As the helicopter headed towards the sea, however, Chaibancha lost his grip and plummeted several hundred feet to the beach below. Original cinema prints included the shot in full; this version respectfully closes of a freeze-frame of Red Eagle still on the ladder, with Thai text describing the circumstances of their hero's demise. He died as he lived - in one take, and with the cameras rolling almost continuously. In a way, it's a privilege to share an action hero's final moments on this earth as a big-screen spectacle. It's certainly not going to appear in a closing minutes of a Hollywood film, and considering some of our so-called action heroes, you almost wish it would happen more often.


[Golden Eagle is available on English subtitled DVD from Hkflix.com as "In-Sree Tong" and from Thaicdexpress.com as "Insee thong". Thaicdexpress also has another Red Eagle film entitled "Aowasaan In See Dang"]

Jack:
Originally, Andrew sent me the the above review plus "Eye of the Condor" to post on my Filipino blog, "When the Vietnam War raged... in the Philippines". However, that blog is basically devoted to trashy Filipino Vietnam War movies so it's with much pleasure I can finally post them here where they belong; on a website entirely devoted to world-weird films! :D