aka Eyes of the Condor (Greek VHS) 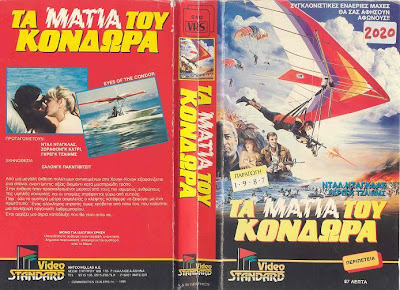 
by Andrew Leavold
Most Filipino B-film exports would never have made it past Manila Customs if it weren't for the efforts of Davian International Ltd, a distribution and later production company formed by Hong Kong-born David Hung and his Philippines partner Vivian Andico (hence the “Dav-“ and “-ian” the company name) in 1986. Like Bobby A. Suarez before him, Hung had already muddied his boots in the low-budget distribution trenches as one of Joseph Lai's General Managers for Intercontinental Film Distribution Ltd, and was keen to source saleable action films for his fledgling company, primarily from his own back yard. Davian purchased the international rights to Tagalog-language films, recut them from their customary two hour running times to a more serviceable 90 minutes, and supervised the dubbing into English, more often than not in Quezon City. Hung would then set up a booth at Cannes and the American Film Market and peddle his wares directly to overseas distributors. In this way, even the most generic Tagalog action film for other local producers – such as the Dante Varona vehicle Commander Lawin (1981) and The Day They Robbed America (1985) - could be given a Davian makeover and raffled off to one of their less discerning customers.

Davian also procured a pair of Thai action films, the Sorapong Chatree-starrer Cobra Thunderbolt (dir. Tanong Srichua, 1984) and Eye Of The Condor, presumably from the same period, although Davian's version bears a 1987 copyright in its closing credit. And kudos to their impeccable taste, I should add: it's an ambitious and utterly charming crime-caper featuring a jewel thief, two cops, a bald Indian, two Caucasian baddies and a squadron of dwarves, all looking for the legendary Eye of the Condor, a precious diamond (the eighth largest in the world, we're constantly reminded, and the most beautiful). The gem disappears from its owner's exhibition on his yacht in the opening sequence: pandemonium breaks out as suave shyster Kenny Hemmings swims with the Eye to a waiting speedboat and his dwarf driver takes off, allowing Kenny to escape via the hang-glider conveniently located in the boat, thus living up to his moniker The Sky Robber! His slimy American boss tries to double-cross Kenny and his stubby sidekick, but they escape once again with the diamond, and hide out with the cherubic sidekick's miniature mates and their normal-sized sister Nancy, an odd household in which Nancy plays Snow White to their Five Dwarves. That is, if Snow White was Asian. And related to the Seven Dwarves. And if there were five... They're more like hyperactive children, running around "Uncle" Kenny's ankles and causing mayhem and structural damage while he suavely woos the suitably impressed Nancy.

A pair of cops are assigned to the case of the missing Eye. the glamorous yet humorless Lieutenant Phyllis (no-one's sure if it's her first or last name) and the more laissez-faire Captain Ben Daniel, and they manage to snare Kenny, only to befriend him (awww!) use him as bait to flush out the REAL Mr Big of the Syndicate, a silver-haired slimeball who looks and sounds like a Greek shipping magnate. The diamond goes missing several more times - once at an ice factory, once in an iced coffee, and once in one of the Five Dwarves' stomach - and the film becomes an endless cat-and-mouse game winding up on the Greek Tycoon's island lair, in a protracted, gloriously over-the-top action finale worthy of a Bobby A. Suarez film. It's here our director "Chalong" (S.T.A.B. [1976]) pulls out every trick from his Boys' Own Book of Action Theatrics. There's an invading army on jet skis, a commando squad of Indian Thuggees looking for their temple's sacred stone, and another hang-glider causing explosions galore. There are stunts on top of other stunts, and that's on top of the rest of the film's kung fu, tuk-tuk chase, mid-air knife fight, and the cheapest, ugliest furniture and sets, unfashionable EVEN for the Eighties.

Eye Of The Condor sounds like the rest of Davian's pickups, courtesy of their Quezon City dubbing team. It's not just your regular kung fu voiceovers; Davian's team use a plethora of silly and inappropriate voices, squeaks, panting and squarks, not least the penguin sounds uttered by the five munchkins. Luckily the film plays the dwarves' antics for cheap yucks, an essential ingredient in these Thai masala movies. Whether on the receiving end of a Three Stooges-style ladder gag or trotting out the old "one dwarf on the other's shoulders under a long coat pretending to be a tall person" routine, these little guys emote their hearts out and provide an added element to what's already a preposterous crime caper. I'm not sure if it's an absurdist element or the film's missing heart, but it lifts Eye Of The Condor far above most of South East Asia's relatively one-dimensional action movies into a completely new realm. And that's a tall order (f'nar, f'nar!).


Jack:
Originally, Andrew sent me the the above review plus "Golden Eagle" to post on my Filipino blog, "When the Vietnam War raged... in the Philippines". However, that blog is basically devoted to trashy Filipino Vietnam War movies so it's with much pleasure I can finally post them here where they belong; on a website entirely devoted to world-weird films! :D

Email ThisBlogThis!Share to TwitterShare to FacebookShare to Pinterest
Labels: Eye of the Condor, Reviews by Andrew Leavold, Thailand, VHS Greece