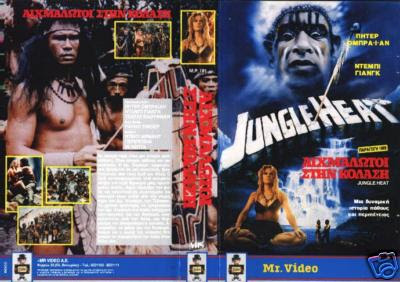 Here's a quick recommendation for you; The rare and highly entertaining Indonesian film JUNGLE HEAT (not to be confused with the Taiwan film of the same English title, also known as "Last Breath") is on eBay right now!

The auction runs for about one more day. The film is directed by Ratno Timoer who also did the awesome movies THE DEVIL'S SWORD and THE BLIND WARRIOR and also acted and directed many more films (check his huge filmography here) and Peter "Rambu" O'Brian from THE INTRUDER (aka Rambu) is in the movie!

It goes without saying the film is not on DVD and probably won't be. And also, this Greek VHS is the only English dubbed release anywhere! Do notice that the tape is in the European PAL format so you'll need a multi system player if you're in North America or any other area that uses the NTSC format.
For the auction go here.