"This story is told ... by the man who can not forget a brutal war" 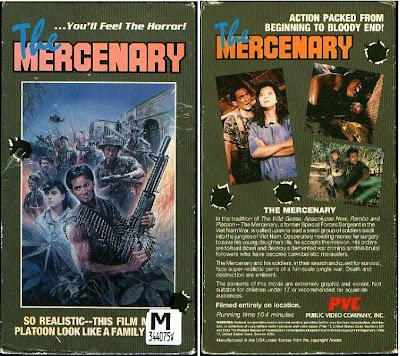 
CANNIBAL MERCENARY
aka MERCENARY
aka MERCENARY CANNIBAL
aka MERCENARY CANNIBALS
aka JUNGLE KILLERS - THE JAGUAR PROJECT
aka THE JAGUAR PROJECT
aka LAST BREATH [This alternative title is NOT correct. The mistake stems from a post on Dvdmaniacs where Linn Haynes (RIP) mentioned it was the film's original title but he confused the film with another war film from Taiwan called "Last Breath" and which is known internationally as "Jungle Heat" /Jack]

Ready for one of the most infamous and sought-after Asian exploitation flicks of all time? Yes? Fine! ‘Cause here it is, the notorious CANNIBAL MERCENARY, one of the goriest jungle shockers ever to hit the screen!

CANNIBAL MERCENARY tells the story of Wilson, a former soldier who scrape a bare living in a clinic and is haunted by memories of the horrible war he has taken part in. His only daughter is seriously ill and this makes him even more disillusioned. One day he is visited by a Colonel who offers him 500.000 dollars for a secret mission - for his native country, he adds earnestly. After a short time of hesitation he accepts the offer, mainly because with the money he is able to finance his daughter the much-needed operation. Soon he finds himself back in Vietnam, as a leader of a small group of mercenaries, and his first objective is to find his contact who will give him further details of the operation. The jungle turns out to be pure hell, full with kill-happy enemies, nasty booby-traps, dangerous animals and an unpleasant climate. The mood is extremely tense and the slightest spark can be the trigger to a terrible explosion, as all the guys are extremely irritated and their nerves strained to the limits.

Soon the group is decimated but the surviving mercenaries continue their mission unperturbed. Finally they meet a woman who turns out to be their contact person. After some more ordeals (some of the men are mistaken as enemies, tied to the ground, and pissed on) Wilson and his men have a breather in a small village, but not for long as the enemies are already informed of Wilson’s arrival and want nothing more than to get rid of him. Eventually the woman spills the beans and informs Wilson about his mission: he has to kill a certain disloyal Colonel who lives in this area and is the head of a well-organised drug trafficker organisation. How brutal and uncompromising this Colonel is can be seen in his camp where he tortures prisoners and slowly hangs them to death. And, as fate will have it, our group of mercenaries finally falls into the evil hands of the crazy Colonel, and to their horror they find out that most of the Colonel’s men are bloodthirsty cannibals who particularly like to feast on fresh human brains. So, once again, one question remains: who will survive and what will be left of them?

Before the film kicks off we can see an on-screen information that “this story is told... by a man who can not forget a brutal war!” This is followed by several images of war, like tanks rolling around, machine gun fire, and numerous explosions. Then the dark story slowly unfolds on the screen, bar the slightest trace of humour. We get to know the ‘hero’ of the piece, a disillusioned, cynical ex-soldier who voluntarily goes back to the horrors he can not forget in order to help his sick daughter. And as soon as Wilson enters the jungle we learn immediately that this is the kind of movie that makes no prisoners. “It’s either kill... or be killed” as one character points out accurately. Soon the group stumbles upon a few Vietcongs and before you can ask yourself ‘what will Rambo do in a situation like this?’ our heroes eliminate the enemies by decapitation, slashing their throats, crushing their skulls or simply gunning them down. All this is presented in a vicious, gruesome, but realistic and effective way and you know right away that CANNIBAL MERCENARY isn’t your ordinary jungle action flick.

Surprisingly, the acting is quite good and convincing. Special mention must go to the guy who plays Wilson, who gives us a credible and memorable performance of the broken anti-hero. But the other cast members are pretty good too, and one can almost feel their pain when they are confronted with the most horrific things imaginable. The camerawork is also very good, as it manages to give us the impression that we’re almost amidst the terrible goings-on (it’s really a shame that the camerawork can’t be fully appreciated as the only remaining uncensored version of this film is in horrible full screen). While the editing is not that good the music certainly is. Although some pieces are lifted from the Goblin soundtrack of the European version of DAWN OF THE DEAD (1978) I have to say that these pieces also work very well in this movie and perfectly underline and intensify certain key sequences. The story is interesting too, even though some parts have a lot in common with Francis Ford Coppola’s APOCALYPSE NOW (1979), mainly the Vietnam setting and the crazy Colonel. The idea to add some brain-eating cannibals to the already cruel proceedings eventually lifts the film into ultra-gore territory.

Truth be told, I have to say I came away with mixed impressions. On the one hand it portrays the horrors of war very well, and on the other hand it revels in unnecessary brutality and detailed gross-out gore moments. I think the ambition of the makers (if there ever was one) is somehow marred by this exploitative approach, though gorehounds certainly will be more than pleased by the on-screen violence. There are decapitations, slashed throats, knife wounds, bullet hits, crushed skulls, bisections, castrations, bullets in the heads, swords through bodies, and arrows that bore into flesh. But all this probably can’t prepare you for the gory sights in the finale, when one unfortunate man is buried up to his neck and his unprotected head is cracked open with hammer and chisel in loving detail. Blood gushes, the brains are exposed... and soon the hungry cannibals have the feast of the day. Before you have time to recover from this shock another prisoner has his eyes gouged out by the insane Colonel! No wonder the major part of these scenes are missing from the export print.

Even if the splatter effects look quite cheaply they are very realistic and pretty convincing and no worse than those seen in Italian cannibal gut-crunchers. CANNIBAL MERCENARY is an immensely gripping, brutal and shocking exploitation flick and when the 103 minutes running time are finally over all you can admit is that it does live up to its notoriety. The great ending is kind of schizophrenic by the way. One part of it is happy and optimistic, while the other part is very dark and nihilistic. This somehow reflects the whole movie that sometimes is a riveting anti-war film and sometimes a cheap and ultra-violent exploitation flick. The cover scan seen on the top is from the German DVD release, but before you surf happily to your next online shop let me tell you that this version is the export print of the movie, which infamous producer Tomas Tang cut together some time in the 1980s. While the full uncut CANNIBAL MERCENARY runs 102 min. 25 sec. the export version runs a mere 82 min. 38 sec. Both lots of story elements and most of the gorier moments are cut out, and - to add insult to injury - someone shot brand new scenes with three American idiots searching for a treasure that later were inserted into the movie. This doesn’t make much of a sense, but in this way the running time clocks in at over 80 minutes, since about 30 to 35 minutes (minimum!) are removed from the original version! So do yourself a favour and stay clear of the export version.

As stated above the uncut and uncensored CANNIBAL MERCENARY is the version to look out for. It was released in the 1980s in the USA on tape (with the on-screen title MERCENARY), but this version was out of print years ago so chances are pretty much nil that you are able to track it down. This version (as far as I know the only uncut release of this great film) is in a horrible full screen format and dubbed into English, and not very good at that. The German DVD states that it is based on the only remaining print of the movie but I refuse to believe this and continue hoping for an uncensored, widescreen DVD in the (hopefully) not-too-distant future. 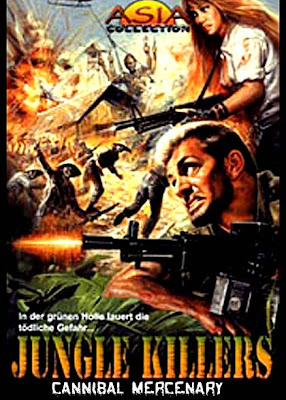 [not only is this German dvd heavily cut, it has also received the 'Thomas Thang treatment'! In other words; yes it's a cut 'n' paste version with inserts of Western actors to make it look more, well, Western!!] 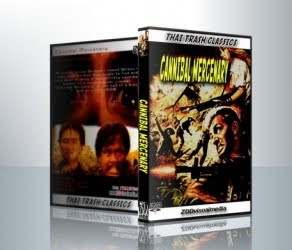 This UK bootleg from ZDD contains the long uncut version from the US tape. The picture quality is good and as there is no official release available at present time this is the only way to buy the uncut film.

Thanks to Günter Müller for sending me his old review from "Weird Asia".

Also thanks to Andrew for his review.

And lastly but certainly not least big thanks to Kiba of Cinehound forum who sent me the scan of the Thai VCD cover.