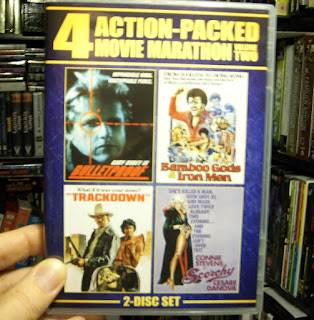 *Cast and company credits are borrowed from Andrew Leavold's blog. 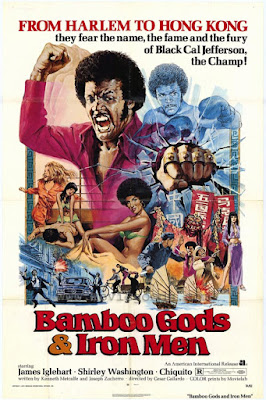 I have a feeling everyone missed the DVD release of the Cirio H. Santiago produced BAMBOO GODS AND IRON MEN when it came out from Shout Factory (aka Scream Factory) seven years ago (2013). Hell, I missed the news about it too!!! I already had a dvd-r copy of the film (cheers, Andrew) but if memory serves me well it's a very rough fullscreen version off a print.

Maybe everyone overlooked the release as the film was hidden away in a four film movie pack with three "ordinary" American action films (I haven't watched the other three films yet). The DVD is part of Shout Factory's "4 Action-Packed Movie Marathon Volume Two". The film is presented fully letterboxed and anamorphic. The print is a bit worn during intro credits but other than that it looks fine for DVD; And mind you it certainly looks heaps better than old fullscreen copies off dubious prints or worn video tapes. I wish someone would release a blu-ray but I'm not holding my breath till that happens. This DVD is most likely as good as it's ever gonna get.

A boxer (James Iglehart) and his wife go to Hong Kong for their honeymoon. They buy an ugly Buddha statue in a gift shop and later James saves a Chinese mute (Chiquito) from drowing. Both the Buddha and the Chinese guy (who happens to be great at kung fu) become a royal pain in the newlywed's collective ass; A goon kingpin (played by good ol'e Ken Metcalfe) wants the Buddha as it apparently contains some power to control the world. And due to old Chinese belief the Chinese guy now belongs to James Iglehart because he saved his life. Later they go to the Philippines and more trouble ensues. Lots of action, kung fu, fights, humour that doesn't suck (humour in these films often makes me grind my teeth) and a fair bit of nudity. Eddie Garcia and a bunch of other well known Filipino actors are in this (look them up on Name that Filipino Actor!). 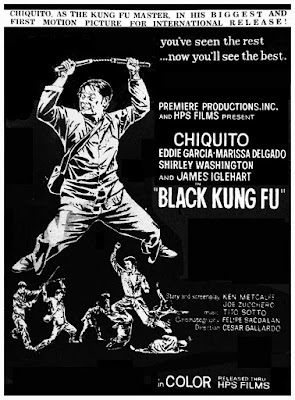 BAMBOO GODS AND IRON MEN is a fun flick and what makes it twice as much fun are the bad guys. Bald-headed Ken Metcalfe and his goons and goonette (singular as there's only one, the lovely Marissa Delgado) certainly make up at least half the fun if you ask me. Too bad this film has been overlooked for such a long time - and too bad it's still overlooked!

By the way, the film was released in the Philippines under the title BLACK KUNG FU. Needless to say, the drunk monkeys that run the less than reliable IMDb have listed the film  under each title! They're not two films, just the one.

I found the trailer and re-uploaded it. The quality is terrible but it seems it's the only one out there in Cyberspace.

As I post this entry the Shout Factory DVD is still available from WOWHD (it's cheap!). Go here.