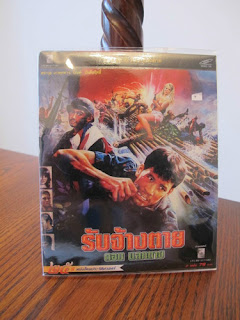 If you've followed this blog a while you'll know I've been on the hunt for the RARE (as in totally uber rare!!) sequel to CANNIBAL MERCENARY (aka Mercenary / Employ For Die) for a couple of years now (if not, check here). The sequel has ONLY been released on a very rare video-cd in Thailand (in Thai language without subtitles).

A while back I was so fortunate as to find the the POSTER for the film by total chance at an eBay auction from a seller in Canada. The seller didn't know which film the poster was for and had listed it without the film's title!

However, the film itself has evaded me completely so far. Well, until a few days ago when my red eBay auto search lights started blinking like crazy! A seller in the UK had the VCD up for auction. "Unfortunately", he was fully aware of the rarity of the film/disc and starting price was £30 ($46).

There weren't all that many bids in the days that followed but sadly they quickly got out of my range. I knew of another collector who was interested and sent him a PM about the auction but needless to say he already knew about it. Winning bid came to £56 ($86) and I'm happy to say it was my fellow collector friend who won this rare release. Big congrats, mate.

To see the CANNIBAL MERCENARY 2 poster go here.
Posted by Jack J at 3:10 am