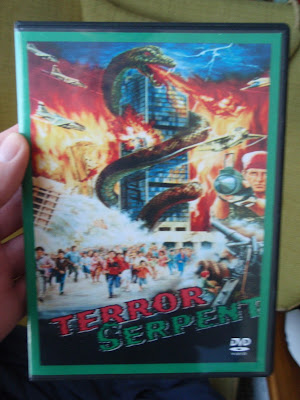 Recently, I mentioned the upcoming dvd of THUNDER OF GIGANTIC SERPENT (aka Terror Serpent) from ATTACKAFANT ENTERTAINMENT and also mentioned that I was going to order a bootleg off eBay since the official dvd might still take a while to get released. I've finally received the dvd and as I expected the disc is a bootleg off a vhs and... yes, it's off a Greek video tape. LMAO. The picture quality looks like a second generation vhs dupe. I wish I could have got a dvd from that guy from Global in South Africa (as his dvd is probably off a real film print) but, oh well, at least I get to watch the film. I'm still looking forward to the official dvd, of course. It's bound to look better than this. 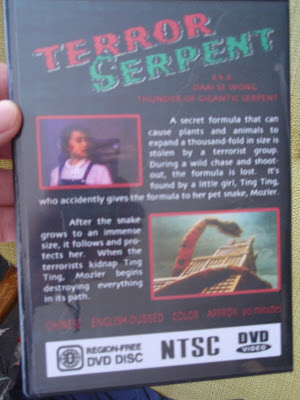