Here's some more multo bene interessanto info that I've just picked up today: The three Eddie Romero directed Filipino films, BEYOND ATLANTIS, BEAST OF THE YELLOW NIGHT, and TWILIGHT PEOPLE have been re-released on reg. 1 DVD by VCA as part of a 12 film box set called SCREAM THEATER: THE SADISTIC 70S.

This is certainly brilliant news as these films are way outta print! There are two new copies of BEYOND ATLANTIS listed on Amazon.com right now, and the cheapest one is $95!! The cheapest second hand copy is 42 bucks. Retromedia's DVD release of BEAST OF THE YELLOW NIGHT is still available on Amazon fairly cheap (around $10) and it's a lbx print too. However, TWILIGHT PEOPLE is also rather expensive, retailing for around $40 for a new copy.

The 12 films are on 4 discs so there could be compression issues, however, a couple of gents on Dvdmanicas were nice enough and informed me that the picture quality is good on all three films. Charlie_G of Dvdmanicas sent me some screen grabs from BEYOND ATLANTIS and they certainly look alright. Obviously I don't know about compression and shit or how they'll look on a 50" TV set but when you (like me) are used to shit fullscreen pixellating VCDs from Malaysia and 5th generation video dupes then you'll think this is like watching films from Heaven. LOL. 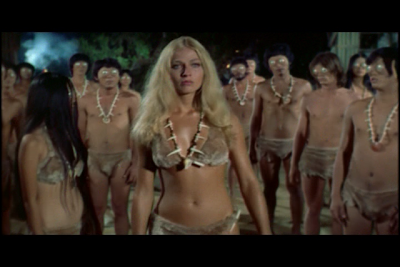 The full set consists of these films:

The set isn't listed on Amazon but it's available directly from VCI for just under $15 + postage. They do ship overseas. I already have the old releases so I won't be ordering this set but the films are cool and if you haven't got them you can certainly save a lot on this instead of coughing up for the OOP versions. I paid $40 for my copy of BEYOND ATLANTIS a couple of years back. >_<