aka THE TWILIGHT SIREN 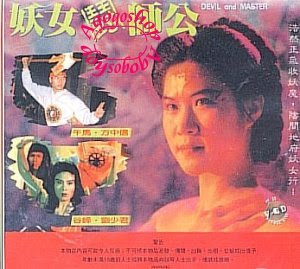 I'm getting this VCD from Hong Kong. I've never seen the film before but YesAsia's description makes it sound pretty good;

YesAsia description:
"Directed by Ma Siu Wai, 1991 Taiwan horror movie The Twilight Siren (a.k.a. Devil and Master) stars a bunch of famous actors from Hong Kong, which include Wu Ma, Alex Fong Chung Sun, Lau Siu Kwan, and Ku Feng. The story opens with archeology students Luo and Liu going to the mountains on an archeological expedition. Liu inadvertently discovers a skull and a token, both of which are found to be relics from Ming Dynasty. Liu brings the specimens home. One day, Liu accidentally gets wounded at home, and blood drips into the skull, liberating the spirit Xiao Juan inside. Mesmerized by Xiao Juan's beauty, Luo doesn't realize that she is under the control of a vicious demon..."

The VCD is OOP and sold out at YesAsia but they stock the Malay DVD version which is described as being in the letterbox format. I have no idea what format this VCD is in. With my usual luck it's probably fullscreen, haha.
Posted by Jack J at 1:46 am