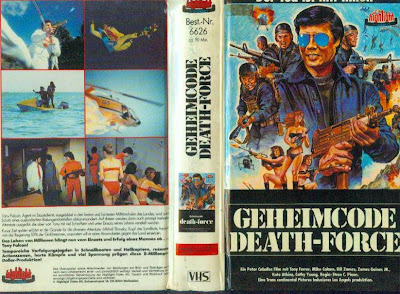 Thanks to Resonator of Cinehound I'm now the happy owner of the cool German hardbox VHS release of SABOTAGE. Credits and reviews here.


AND I WON THIS ON EBAY: 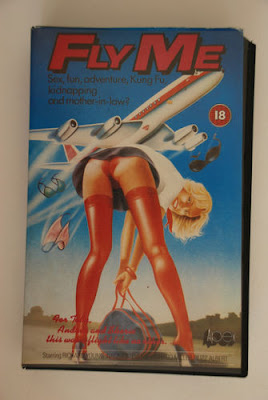 The (according to the BBFC homepage) uncut UK vhs release of Cirio H. Santiago's FLY ME!! As I reported not long ago it was released on reg. 1 dvd from SHOUT! Factory in the US but their print is cut (because it was the absolutely ONLY print they could find). A member on Dvdmaniacs forum, Ray R, specified the cuts to the dvd in a recent thread:

"Got my copy today and just watched FLY ME. The pluses. picture looks great (much better than the "collector's edition" DVD I purchased a few years ago), nice to see vibrant colors and be able to make out the dark scenes.

The minuses... most of the print damage is evident towards the end of the "first reel" (Toby's mother putting on night face cream by the mirror), the final bit of dialogue is missing where she warns Toby about traveling in Hong Kong alone and makes a slit-throat motion to tell her what could happen. Also a couple of MAJOR disappointments: Lyllah Torena's credit in the opening is missing (you can see her screen shot at the tail end of the trailer), and two scenes in the "fourth reel" are missing: immediately after Toby's mother goes to the police, the following scene was back at their hotel (Toby's mother is taking a pizza out of the oven, David sneaks into the bathroom via the window while Toby is preparing to take a shower... this is where Toby tells him about the "tour" and refers to the charter company as "South Seas" in an attempt to remember the name), also the scene where David makes his entrance in the club is entirely missing.

Overall not too bad and I'm glad they were able to do what they could with the material they had onhand, but looks like I'll be hanging on to the bootleg for a while. "