Wild and crazy films that must be seen to be believed. And then you even have to check if someone spiced your lemonade with secret substances and made you imagine things that weren't really happening on the TV screen in front of you! But no, they are for real alright!!

These films are dubbed into English and the only place they've probably ever been release are in the Scandinavian countries. If they've even been release in HK it was so long ago that no one remembers - and whatever copies that once were distributed were probably all soaked in petrol and torched by angry customers who rented them from video outlets!

Needless to say you can forget about DVD releases ANYWHERE!! (unless you count DVDs from shady bootleggers like VideoAsia who would use something like 3'rd generation VHS dupes for their "releases").

Check out this scene from STRIKE OF THE TORTURED ANGELS (from 1982, maybe!). It's bizarre to say the least. And before you ask... no, the Chinese girl whose skin is painted black and who is wearing an afro ISN'T playing a Chinese character who's trying to disguise as a black person, no-no, she is a Chinese actress PLAYING a black girl!!! I mean... how... what... I mean... HUH???

I've posted two clips from another of these insane & obscure HK films, SHARK OPERATION; you can watch them here. Thanks to Member-X of Cinehound forum who uploaded the clips from both movies.


PS: Some of these films are also on VHS in Holland and I wouldn't be surprised if they're also out on video in Greece. 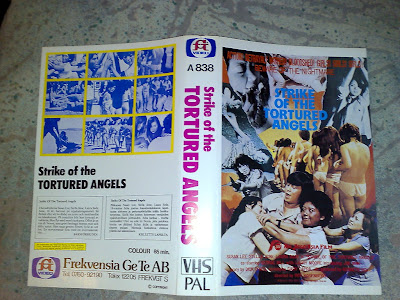