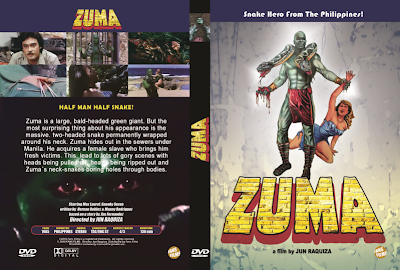 Thanks to my French Canadian friend Matt over in Korea I now own a remastered, uncut, and subtitled print of the legendary Filipino horror movie ZUMA!! Yay!!! I've had a dvd-r dupe of ZUMA for quite some time but the film is in Tagalog and needless to say the Japanse VHS doesn't have English subs. ZUMA has never been released in an English friendly edition anywhere so it goes without saying that this is a custom made version. I don't download from torrent sites but I'm aware that a subtitled version of the Japanese VHS has been available for a while. However, firstly the Japanese VHS is missing no less than FIVE minutes and apparently the print wasn't all that good (and out of sync too). This new print has the missing scenes re-inserted (from a TV print), and Matt has remastered the print and re-synced the audio. Oh, and he also did the way cool cover you see in the above!! Cheers, Matt.
Matt also sent me a subtitled and uncut fan edit that he did of POSSESSED II and a properly letterboxed edition of the Indo flick HUNGRY SNAKE WOMAN (starring Suzzanna). More YAY!!!
Posted by Jack J at 5:06 am