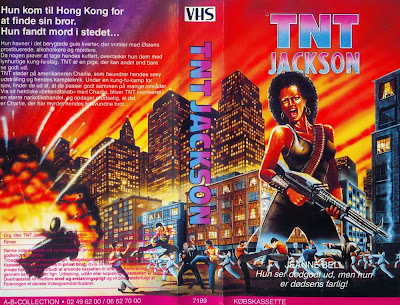 Brilliant news!! The last couple of days I've been asking around to see if there's a proper DVD release of Cirio H. Santiago's TNT JACKSON from 1974 available anywhere. The film is a Filipino/American co-production with Roger Corman's company, and it stars renowned Oxford trained character actress Jeannie Bell in the lead (alright-alright, her training was from being a Playboy Playmate but that's even better, lol).

Santiago liked the film so much that he later remade it not once but twice (as Firecracker aka Naked Fist in 1981, and Angelfist in '92)! There are about (at least) 10 different DVD releases of the film in the US but they're all public domain releases and they certainly look like public domain. They look like ass. My old Danish ex-rental VHS looks heaps better. The cover on this page is from the sell-thru release but they're almost identical.

Anyway, the news from today is that Cliff Mac and his cool Shout label are putting TNT JACKSON out next year on DVD with another Cirio H. Santiago film called SAVAGE!!! Great news or what! I have no idea if there's any DVD releases of SAVAGE but I wouldn't be surprised if there's only similar multo crappy public domain shit available. Obviously, I have the film on Danish ex-rental VHS, haha (thanks heaps to Diabolik/Hans-Jørgen!).

I couldn't find a trailer on YouTube so here's a bit from the film. You don't need to watch it all just check a couple of minutes. The entire film is on YouTube's film upload channel but it's the same crappy DVD version that probably would make any grindhouse cinema proud. Awful picture, awful sound, jumpy print at reel ends, the lot. Wait for the new DVD or get a copy of (or off) a video tape.

Jeannie Bell was also in Santiago's THE MUTHERS and a few more film and TV things like "Ironside" and ""Kolchak: The Night Stalker". I have no idea what she's up to these days.
Posted by Jack J at 2:56 am